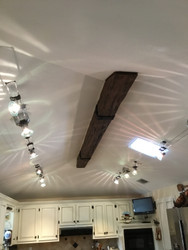 FauxWoodBeams.com customer Hussein sent us before and after photos of his simple and elegant kitchen design using a Custom Timber beam.

When customers send in pictures of the projects they've completed, they'll often include 'before' and 'after' pictures - and these always help to demonstrate what a stunning difference our beams can make to a home. However, we've rarely seen pictures that show such a dramatic difference than the ones sent to us recently by customer Hussein Mzee - who used one of our Custom Timber beams and matching accessory beam straps to add a ceiling fixture that transformed his kitchen. 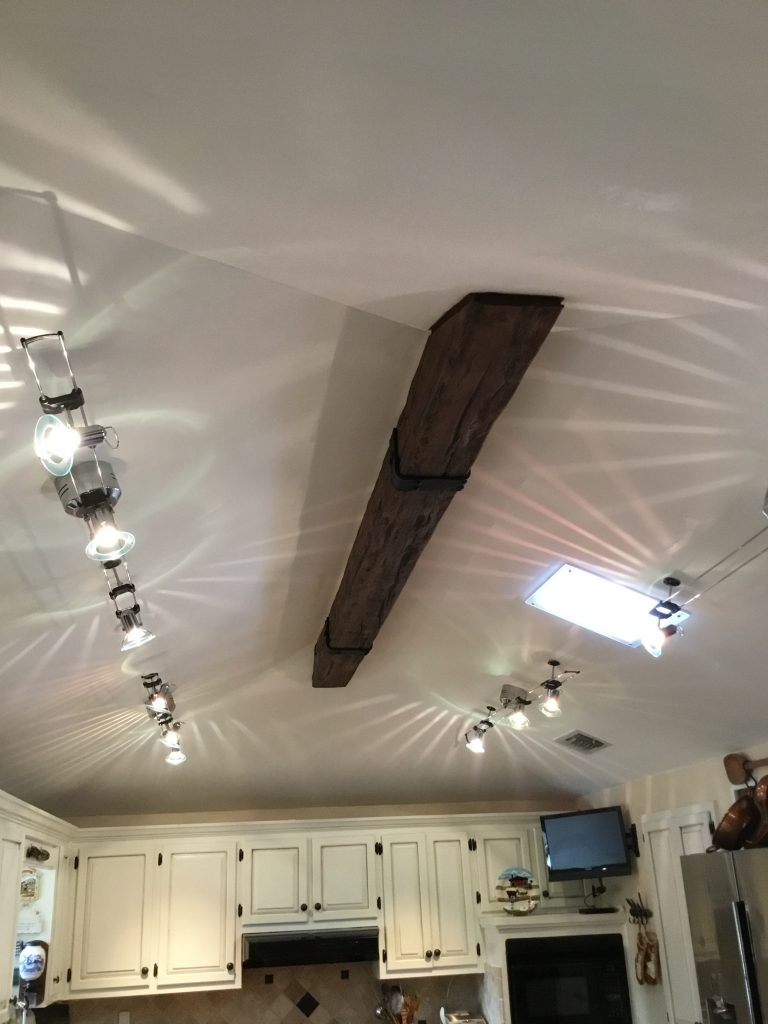 As you can see from the 'before' picture, Hussein's kitchen was nice enough - but the ceiling was a mess.

Artificial beams made of manufactured wood had been installed across the central length, and up each corner, and after being painted a gloss white they just looked... strange. After showing the picture around, most of us at FauxWoodBeams.com agreed that it was the sort of thing you'd see during the 1990s - a kind of, 'seemed like a good idea at the time' thing that started looking very dated, very quickly.

Hussein thought the same way too - and wanted to update the look and feel of the kitchen by tackling the mess of a ceiling. But the question was: What to replace it with?

The manufactured-wood beams could have just been torn down, but the ceiling itself would have then had too much open space to look right; especially given the clean, sleek lines of the white cabinets and tiles installed in the kitchen beneath it. It needed something more... But what?

Hussein liked the idea of wooden beams on the ceiling - as in addition to looking classy, the color of dark, textured wood would contrast perfectly with the lighter kitchen units. But instead of just visiting our site and buying what he assumed would look good, Hussein took to the computer and started doing some research first.

He researched how homes with a similar configuration to his would have been build in the days before modern building materials - when solid timber beams were practical and structural, rather than decorative. He wanted to find how exposed timber beams would have looked in a room like his kitchen; and the answer actually surprised him. 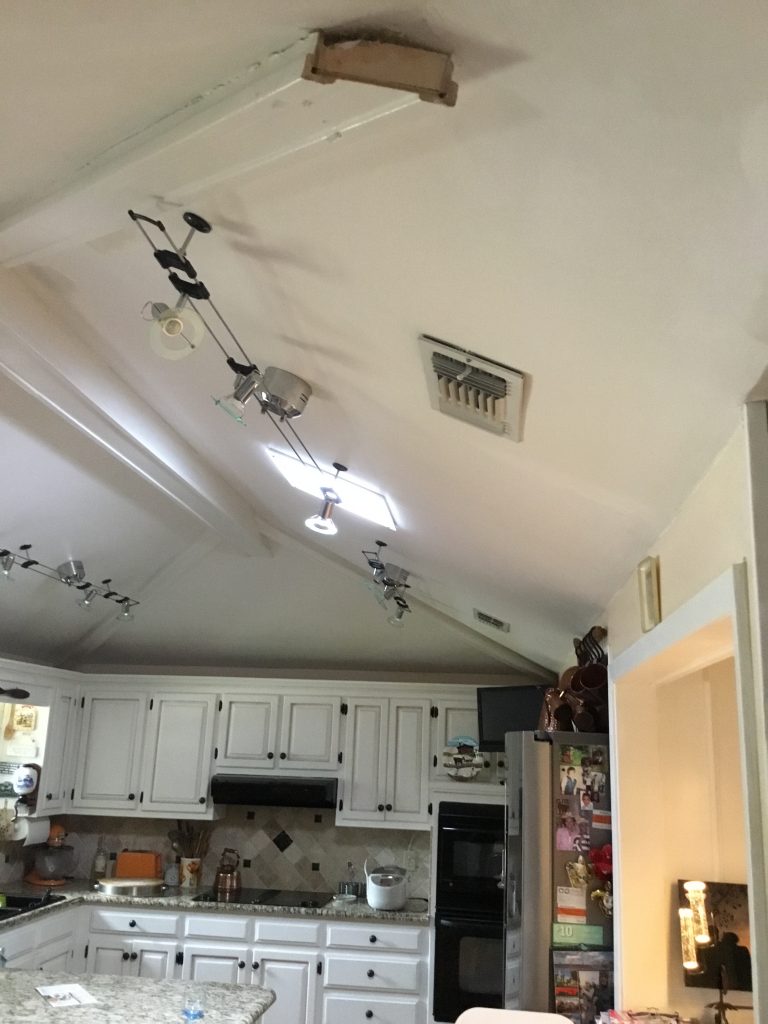 Rather than multiple beams running up the edges of the ceiling, in most of the historical pictures Hussein found the most common was to expose a structural beam was to strip away the plaster covering the largest, central beam at the peak of the ceiling. This left the rest of the corners and ceiling space untouched, but revealed the knotted, richly-textured wooden beam that kept the ceiling together.

As soon as Hussein saw this, he decided that was what he wanted in his kitchen - and reached out to us. With his expert eye and keen specifications, we were able to assist Hussein in picking out a single Custom Timber beam to install in the center of the kitchen, and also provided rubber beam straps that he wanted to include as part of the aesthetic.

When they arrived, Hussein was met with the challenge of installing the new beam - but that proved well-within his skills. Hussein carefully measured the angle of the sloping ceiling, and used a regular wood saw to cut each end of the beam to fit flush. Then, after drilling mounting blocks into the ceiling studs beneath the drywall, the beam slid into place and was secured with screws.

After adding the rubber straps, which are secured with construction adhesive, the faux wood beam looks like a real length of timber that's been exposed. The richly textured details and warm wood color makes the beam incredibly realistic - and Hussein's clever idea of adding the rubber beam straps just adds to the illusion. The straps resemble the wrought iron bands that would have been installed on timber beams to secure and strengthen them.

To use one of our favorite phrases, Hussein's project was elegant in its simplicity - and the end result looks fantastic. It's a world away from the tacky white 'beams' that were there before, and unlike those dated features, will also stand the test of time. Because Hussein's careful research and simple design was based on real ceiling architecture, his new kitchen ceiling will continue to look great for decades to come.