We've seen some incredible projects sent in over the years, but it's always good to remember that simplicity never goes out of style. This DIY music studio by customer Tyler Jones shows how created the perfect vibe with Regency Old Chicago Brick panels.

One of the reasons our faux panels are so popular is that they allow you to bring characterful design elements into your home that would be difficult, if not impossible using the 'real thing.' A perfect example of this is Tyler's studio accent wall. 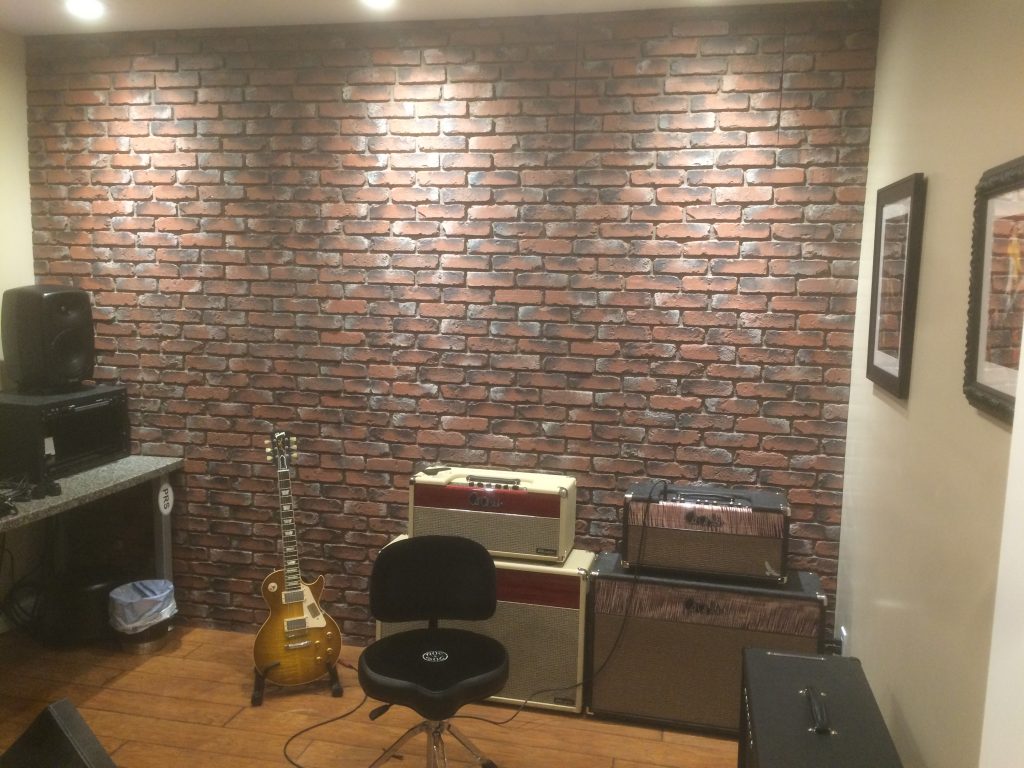 In his email Tyler wrote:

"I was trying to create a room with a certain vibe.  I decided to order some brick samples from your company to figure out what color to go with and after some debating, decided on the Regency Old Chicago brick."

So Tyler was in good company when he chose that particular line of panels - and by comparing the BEFORE and AFTER pictures, you can see how great they turned out.

But we're getting ahead of ourselves... 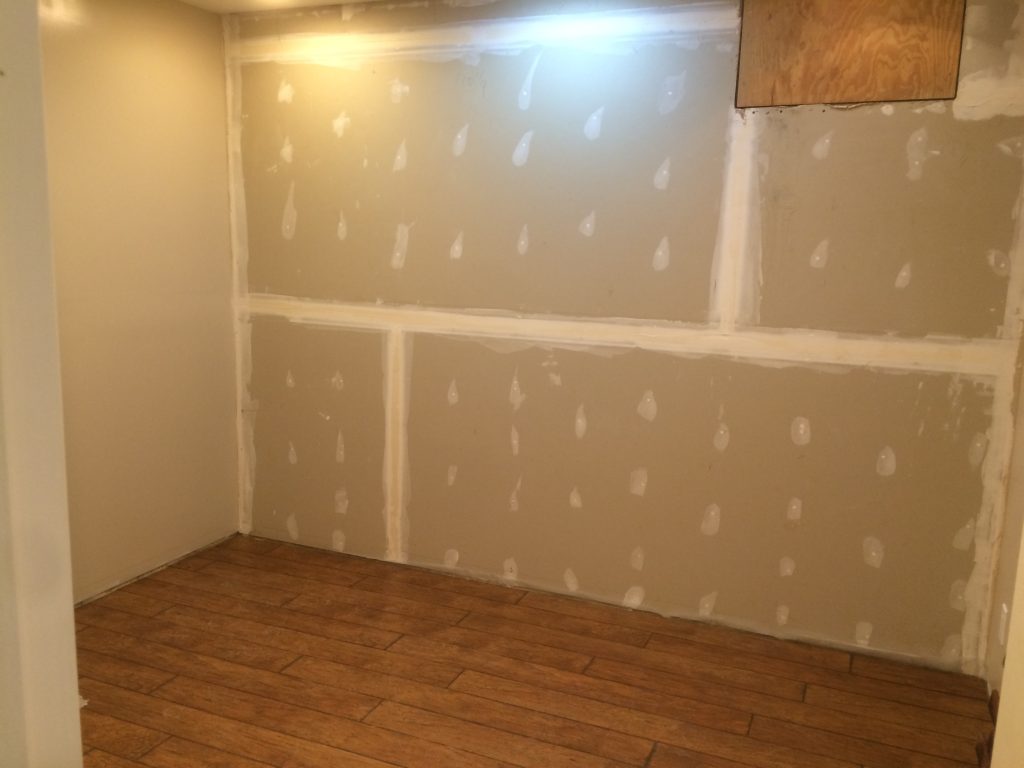 After deciding which panels Tyler wanted to use, he had to decide on the scope of his project. In the end he made a really smart and minimalist choice and decided to cover just one wall from top-to-bottom with the panels. While some other customers have covered all four walls (which also looks amazing), there's a lot to be said for Tyler's choice to keep things simple, as it provides the old-style look he was going for, without the additional cost or complication of tackling corners.

This is what designers call an 'accent' wall - and with our panels, it's straightforward to install.

You start on the bottom left hand corner, adding the first panel directly to the drywall with construction adhesive and screws. The next panel slots into the first like a jigsaw panel, to ensure an absolutely seamless pattern. You keep adding panel after panel until you reach the end of the wall, at which point it's necessary to use a wood saw to cut that final panel to size, to fit flush with the corner.

After the first row is installed, you add the second on top. Here is where you need to be smart - by cutting the left-hand edge of the panel to offset the pattern from the panel below it. This avoids any instantly obvious repetition in the brick texture, which would be one of the only clues that the wall isn't made from real brick. You then carry on the installation to the opposite wall, and trim the final panel just like you did with the row below.

This continues until you reach the top row, at which point it is necessary to trim the height of all the panels to fit flush with the ceiling. Aside from that, the installation continues in the same way as the rows below it - until you have covered the entire row in a seamless texture molded directly from authentic historic brickwork in Chicago. 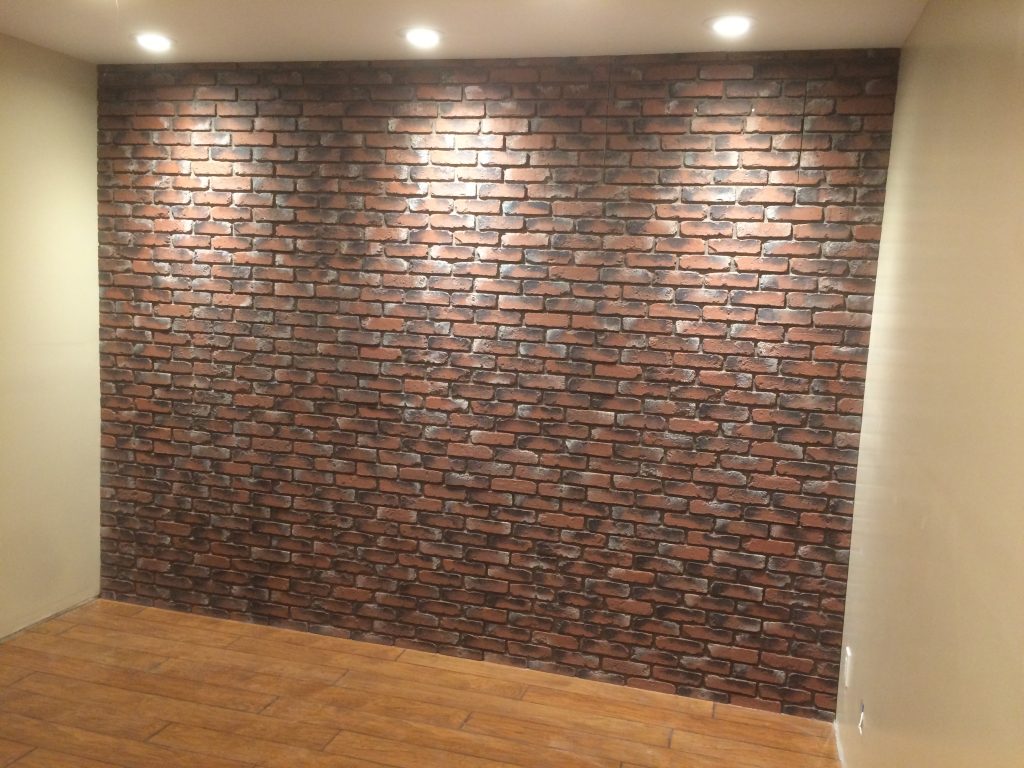 The entire wall has a perfectly seamless brick pattern

Now, that might sound simple - but Tyler was the first to admit there was a hidden challenge he needed to overcome.

"My challenge was that there is a crawl space opening in the right upper corner of the wall that I needed to keep the access to. But after some careful cuts, and work with the touch-up paint kit and caulk/grout from your company, I was able to make the removable door blend right into the wall."

Tyler very cleverly cut a 'door' out of the panel that covered the crawl-space, and did so with such accurate cuts that when the cover was returned into place, the brickwork texture still remained seamless. In fact, if you look at the 'after' picture you'd probably be hard-pressed to immediately spot the removable panel.

Again, that's the sort of customization you just can't do with real brick - which adds another reason to the list of why Tyler made the right move by 'going faux.'

Now the project is complete and the guitars and amplifiers are in place, you'd have to agree that the accent wall adds tons of character. We couldn't be prouder of the way Tyler used our panels, and we're thrilled to share these pictures with you.