One of the reasons our beams are so popular is that they can provide character and classic charm to even the most modern of homes. These great photos, from customer Eric Porisch, reveal just what a difference those beams can make in a new home design.

As you can see from the \"before" pictures, Eric's home was literally brand-new - built with fresh drywall and Spackle, with a stunning and practical modern design that maximized space and natural light. However, it's a lot of bright, white space - and Eric wanted to add some additional character and charm to the bedroom. 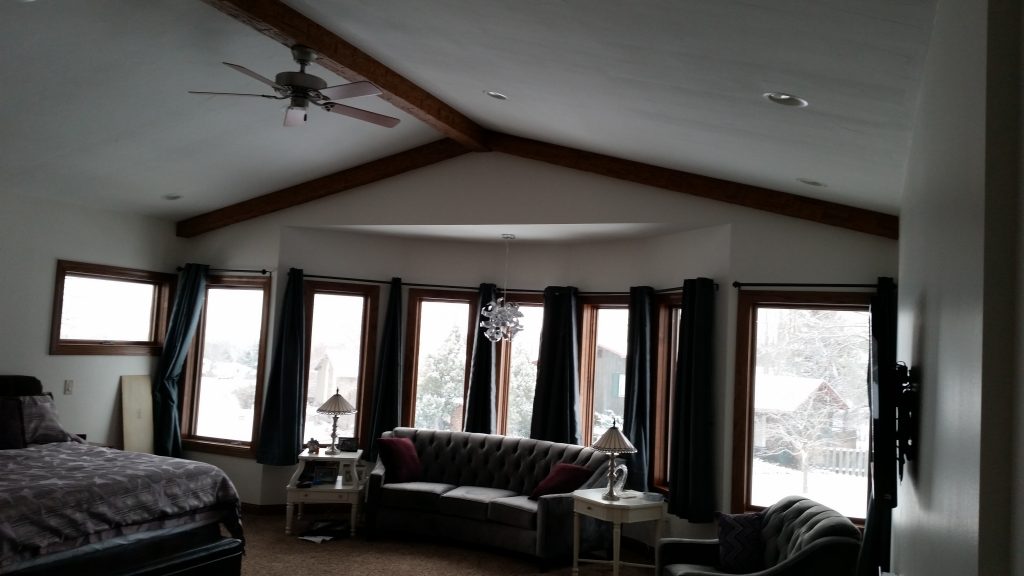 AFTER: Eric's new home design looks spectacular, with the Rough Hewn beams following the edge of the ceiling and apex of the roof.

We've written before about how choosing the right layout of the beams is equally as important as the beams themselves, and Eric's build was a great example of this. He could have chosen a traditional beam layout to resemble how real timber beams would have been used to support the roof in a historic home. However, that would have looked out-of-character in this situation; so instead Eric decided to try something different.

Instead, he used the beams to follow the natural layout of the room - following the corner of each wall and the apex of the roof. This has the result of mirroring the timber framework of a real home, but also left the bright and attractive ceiling spaces open to maximize light and space.

BEFORE: This new build created a lot of open, white space that needed a stylistic framework.

Achieving this look was fairly straightforward. Eric mounted the beams flush against the wall using wooden mounting blocks drilled into the studs of the ceiling. The hollow, u-shaped beams then slotted over the top of them and were secured with regular wood screws.

The biggest challenge was at the corners of the room, where one beam would meet the other. To tackle that, Eric had to saw the beams to slide together. Our beams are made with high density polyurethane foam, so he could do that with a regular wood saw, and then fill any cracks with an appropriate-colored caulk. In fact, because our beams are a uniform size and width, the result was actually more seamless than you'd be able to achieve with genuine timber - which is not consistent in width or finish. The biggest stylistic feature was using a larger center beam across the center of the roof; which mirrored how a bigger beam would support the roof in an older house.

This close-up demonstrates how Eric managed to seamlessly join the beams together.

We think the finished result looks amazing and is a fantastic example of how to install faux beams in a modern home, and keep them looking appropriate.

What do you think? Let us know in the comments section below.