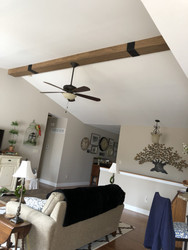 This project demonstrates how 'going faux' can sometimes be better than used real solid wood -- in this case, how easy installing a ceiling fan through a beam can be.

Our faux products are manufactured using molds taken from natural wood - which are then used to create incredibly realistic copies in high density polyurethane foam. The foam captures every detail of the original material, but is durable and lightweight, can be easily cut, trimmed and drilled, and is hollow in the center.

Following an industry-leading coloring process, our beams look so realistic that it's often impossible to tell them from the real thing by looks alone; and at that point choosing whether real or 'faux' is best for your design project becomes about affordability, practicality and versatility.

In the case of this project, the homeowners wanted to run a central beam across their room to give some visual framework to the high, apex ceiling. This is what our beams do best - and the homeowners very wisely researched how an actual exposed timber beam might look on a ceiling like this, and realized a single, central beam was the most realistic placement.

But they also wanted a ceiling fan in that spot -- and this is where the versatility of faux comes into play.

Because our beams are u-shaped and hollow inside, and easy to cut to size with regular woodworking tools, the homeowners were able to drill a hole through the central beam and attach the molding to the bottom of it, to allow the ceiling fan to pass through the beam.

The important thing to note here is that the ceiling fan only looks like it's supported by the beam which isn't load-bearing. It's actually attached to the structural studs in the ceiling.

Because solid wood beams aren't hollow, it would be difficult to install a fan like this.

An additional detail was the clever use of our rubber beam straps on this project; which cover up the seams where one length of beam meets the next. They resemble the old iron straps that used to bind solid timber beams, and are another realistic addition that is more practical than the 'real' thing.

Although very straightforward, we're excited to share pictures of this project with you, because they demonstrate the versatility of our product; and how you can achieve things by 'going faux' that you couldn't with the authentic article.