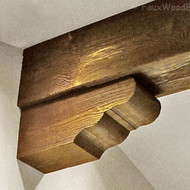 What Size Corbel Do You Need?


Corbels are beautiful architectural features that add class, flair and realism to your project. A corbel visually anchors the end of a beam so it looks solid and well supported.

But how do you know what size corbel to use? The answer depends on the kind of beam you're using.

Suppose your beams have well-defined edges that are square and straight or just slightly rounded. These include our Raised Grain, Woodland and Sandblasted beams. In this case, choose corbels that are the same width as the beams or just slightly narrower.

The first photo shows a corbel slightly narrower than the beam it supports. An equal-width corbel would also look great with this beam. On the other hand, suppose your beams have irregular edges that are distressed and significantly rounded. Our Timber beams are like this. In this case, choose corbels that are at least a couple of inches narrower than the beams. This lets the corbel rest against the flat part of the beam and avoid overlapping the rounded edges.

The second photo shows corbels narrow enough to rest against only the flat part of a heavily distressed and rounded beam.