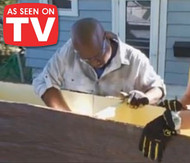 DIY Network's hit new show I Hate My Kitchen recently featured one of our faux wood beams - and host James Young had a lot of good things to say about our product. 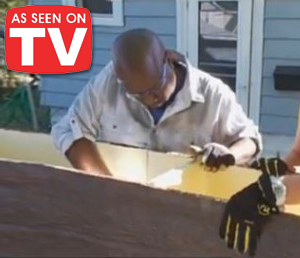 James Young is a big fan of our faux wood beams.

Stop Hating Your Kitchen with the Help of Faux Wood Beams

In I Hate My Kitchen, host James Young meets with homeowners struggling to deal with kitchen disasters - outdated, impractical and just plan ugly kitchens in their homes and apartments. He and a team of DIY Network's designers and contractors completely redo the kitchen to give it a stylish new look that meets the needs of the homeowner's lifestyle.

In a recent episode, featuring young couple Chris and Kristen, James was inspired to use one of our faux wood beams to create an archway where a dividing wall once stood.

"Exposed wood beams are a characteristic element of farmhouse kitchens - but they can be pricey," James admits. "I found a company that made faux wood beams that are both cheaper and lighter."

The beam was ordered unfinished, and one of Kristen's tasks was to stain it to match the existing wood in their home. James explained: "The good thing about this beam is: you can stain it any color you want."

Once Kristen had stained it, she and James needed to cut it to size, and carefully remove the sections which would allow for it to slot over the existing walls and be screwed into place. One of the advantages of our faux wood beams is that they're hollow, and manufactured from a high density foam that can be cut with a regular wood saw. 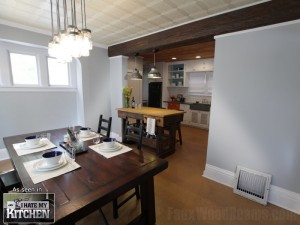 As you can see, the faux beam helps tie together the finished kitchen and dining area.

"This is pretty easy," James admits, as Kristen takes a reciprocating saw to the edges. "If it was a big wood beam, it would be a much different project!"

Because of the lack of space in the room, James and Kristen did the cutting outside - and then it took just three people to maneuver the beam inside, and up into place on the ceiling.

"Once its up, all it takes is a handful of screws on either side to keep it in place," James says. They'd also cut holes in the beam for wiring, to allow them to hook up a fan and lights - more stuff that would be impossible if they'd used a real wood beam.

And the finished result? As you can see from the video, the beam makes the room. "Classic farmhouse flavor meets urban industrial chic," as James describes it.

His verdict? "These lightweight beams are made of high density polyurethane which are molded from actual wood beams, so you get the look of wood at a fraction of the cost."