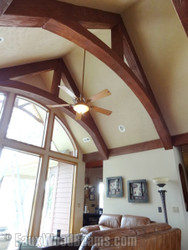 Patrick from Nebraska built a truly stunning series of trusses in his living room using our Arched Woodland beams as the centerpiece. He designed the whole thing from scratch - and we have to say; it looks amazing. 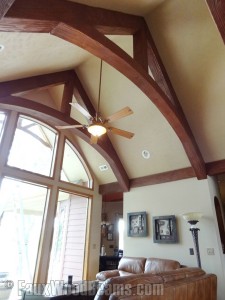 "I'd previously purchased some discontinued beams on clearance with a rustic grain," Patrick wrote in his email.

Those gave him the inspiration to create these stunning modified king trusses with our beams in a different style.

"I had opted for the unstained version so I could customize the color," he explained, "The staining process was easy and they turned out great. I matched the base coat of the arched beams to cover the stain on the clearance beams so the stain color would match. It worked like a champ." 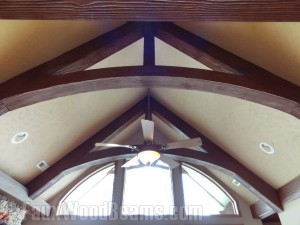 Patrick then designed and constructed the stunning trusses - using his own design, but based on the instructions we've made available on our website.

"I followed the installation instructions provided by FauxWoodBeams, and everything came out great," he writes.

"I took my time performing all the measurements and cuts and although I ran into a few screws while making the cuts to the arched beam, I was amazed at how well hidden the screw heads were." 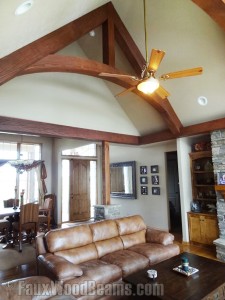 Patrick bought his beams unstained, which allowed him to match the color of the room's other wood elements.

"These beams are very well engineered and assembled. "

It looks like Patrick sticking to the golden rule of "measure twice, cut once" paid off - the amazing photos he sent us reveal just how incredible his ceiling design looks.

We've got some great truss pictures in our collection already, but these have quickly become some of our favorites.