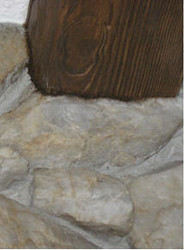 One of our customers sent us some photos recently that really impressed us. One especially impressive bit was the way he fitted the ends of a couple of big beams against the very irregular rock surface of his fireplace. I mean, take a look at the one on the right.

We've talked about scribing here before, and the basic technique is pretty straightforward. In the photo, we're using a compass to draw a scribe line on one beam where it butts against another beam. You hold the compass flat and straight, and slide it up so the point follows the beam's contour while the pencil draws a line. You do this around all sides of the beam and then cut along the lines. Finally you test-fit and use a saw or file to fine-tune the fit.

The catch is that you've got to place the beam you're scribing in exactly the right position relative to the thing it's butting against. That's easy when you can lay out a couple of beams on the floor before installing them, as we've done here. But when you're scribing against a rock wall ten feet off the floor, it's a bit more of a challenge.

So here are the steps:

1. Cut the beam a little longer than its final length. Allow enough length for the beam to extend into the deepest cranny of the wall it's butting against, plus another inch or two for tweaking and final fitting.

2. With a helper, slip the beam over its mounting blocks. Have the helper hold it in place, or temporarily drive a few screws to hold it, so you'll have both hands free to do the scribing. Because the beam is oversize at this point, the far end might be bumping against another beam or surface. Do the best you can to hold it so the end you're scribing is properly aligned.

If you do use temporary screws, position each screw near the far end of the mounting block, away from the wall you're fitting against. Then, when the beam is in its final position an inch or two closer to the wall, you'll be able to re-use the same screw hole through the beam and still hit the mounting block.

3. Scribe lines using a compass around all sides of the beam. Make sure to hold the compass straight as shown in the photo, so the point properly follows the irregular surface as you draw the line. Also make sure your scribe line won't leave the beam too short!

4. Take the beam down and cut along the lines with a jigsaw or coping saw. Angle your cut inward by 20 or 30 degrees so the cut edge is well-defined and a little "sharpened." This will allow the edge to deform a bit for a tighter fit as you press the beam into place.

5. Test the fit, and use a saw or coarse file to make adjustments as needed. Resign yourself to several trips up and down the ladder to get it right, and don't rush it. Keep in mind that you can fill small gaps with matching caulk.

6. When the fit is nice and tight, cut the other end of the beam to its final length.

7. To ensure that no raw polyurethane will ever show at the ends of the beam, stain the cut ends to match the beam's finish.

8. Mount the beam in place with screws and adhesive, and carefully fill any gaps at the scribed end with matching caulk.