We were excited to receive these project pictures from Dream Windows & Interiors, a Long Island-based construction firm who are experts at using our products. They've recently used Custom Timber Beams in Rich Walnut to recreate the stunning look of exposed wooden rafters as part of a living room remodel - and the homeowners were delighted with the results.

The secret of this project's success was the research Dream Windows & Interiors did beforehand. They looked up how similar-sized homes would have been built using wooden beams, and in turn installed the faux versions in the same places where the real supporting beams would have been. 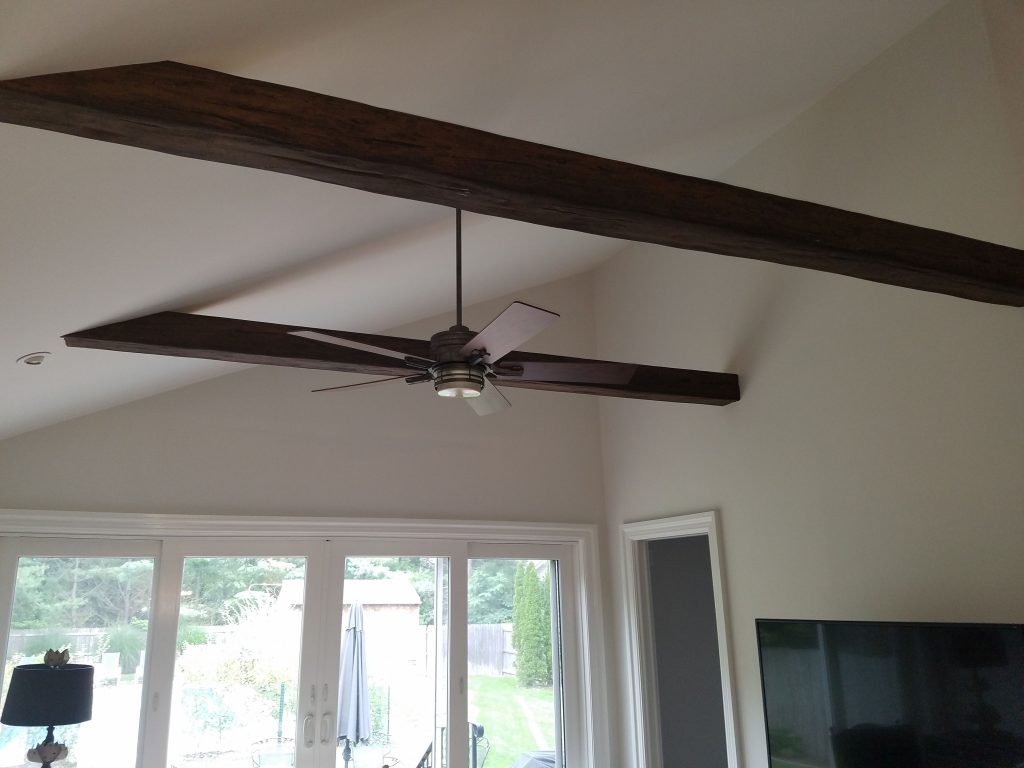 With modern home-building techniques, bracing beams aren't required - but they still look great, and are a fantastic way to frame the exposed space of a high ceiling.

The difference between a rafter and a beam is that the rafter doesn't fit flush with the ceiling - it extends across the open space from one wall to another. With that in mind, installing a faux rafter is slightly different to installing a faux beam.

BEFORE: The sloped ceiling created a lot of empty space.

Normally, you'd drill mounting blocks into the ceiling studs, and mount the beams onto those. Because our beams are constructed in a hollow u-shape, they simply slot over the blocks and secured with screws.

With an exposed rafter, the only points at which the beam touches the ceiling or wall would be at either end, so that's where the mounting blocks are installed in this case. It means there is a large length of beam with no structural support whatsoever - but these beams are made from durable yet lightweight polyurethane, so that isn't an issue. 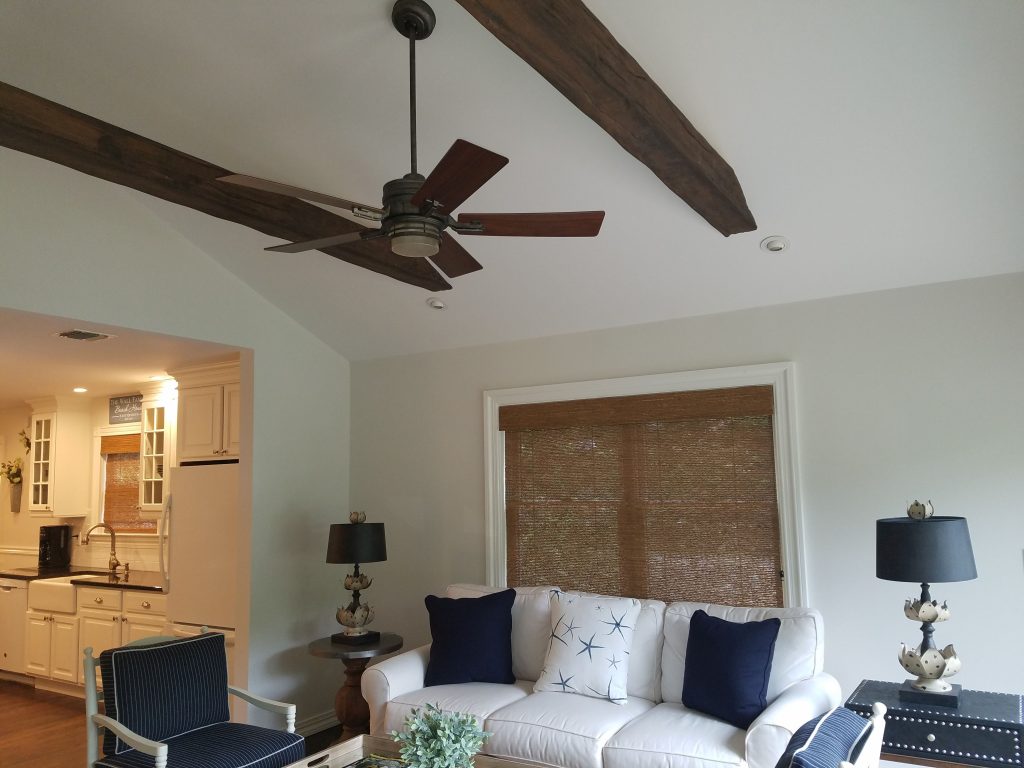 The faux rafters extend from one wall, and meet the ceiling opposite - just like a real supporting rafter would.

In the case of this project, one edge was easy. It fit flush with the wall, so all that was needed was a mounting block drilled into the studs beneath the drywall.

The opposite end of the beam hit the sloping ceiling - and this is where Dream Windows & Interiors used their superior construction experience to get the look just right.

Using careful measurements, they sliced off the end of the beam at an angle, to make sure it fit flush with the opposite ceiling, and then mounted a block into the ceiling to slot it over.

Cutting these beams to shape is pretty easy. You can use a regular wood saw - it's just important to get the measurements just right. In this case, Dream Windows & Interiors did a fantastic job, and the beam slotted over the mounting blocks on either end seamlessly. 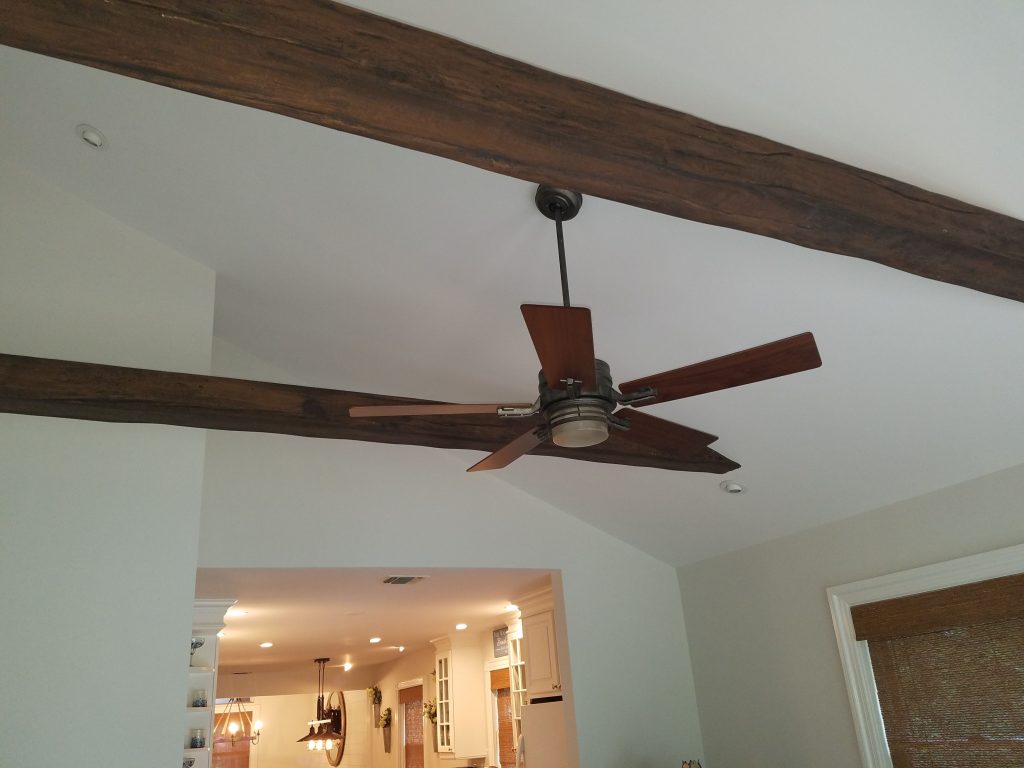 With their rigid polyurethane material, the beams can extend across the entire ceiling even though they're only supported at either end.

And voila! An exposed rafter, looking just like the real thing.

Now, because these rafters are more than seven feet from the floor, anybody who is not a professional basketball player would generally only see the three sides of it from the bottom. That means it's entirely reasonable to purchase our regular three-sided beams and simply have the u-shaped open side facing the ceiling. In fact, some homeowners like doing that, as they can use that hollow to install recessed lights, or run wires and cables from one wall to the other.

However, our beams are also available four-sided if you also want it to look authentic from the top. The fourth side of these beams simply slides into place. The only extra step you'd need to take for a project like this is to cut out an opening for the mounting block.

Ultimately, the whole concept of exposed rafters is straightforward enough for any enterprising homeowner to accomplish on their own - and the professional polish provided by Dream Windows & Interiors serves as a great inspiration to start from.