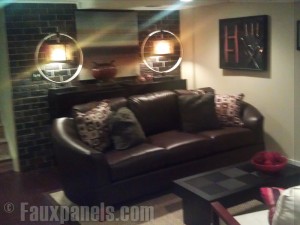 As a former marine, John Latham is no stranger to personal discipline. Years of military service honed his body into a deadly fighting machine – and since leaving the force, he’s continued to keep himself at the peak of physical fitness through a rigorous training routine. That’s how he continues to hit hard and heavy on the professional martial arts circuit.

But maintaining that extreme level of fitness isn’t easy – especially when real-world responsibilities like work and family intervene. As John found himself working longer and longer hours, fitting in time to hit the training mat became more and more of a challenge. 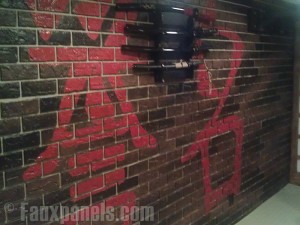 The crew used the brick panels as contrast pieces on the basement wall. Easy to install, yet perfectly mimicking the look and texture of weathered brick, it was a great way to bring stability and solidness to the space – all perfectly in keeping with the highly disciplined martial arts mindset. 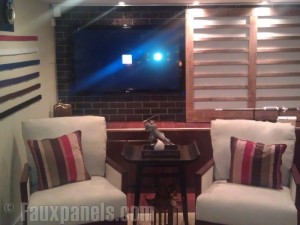 Jason and Tony painted the panels with vivid Oriental motifs; and mounted racks of Samurai swords, Japanese lanterns and black fixtures directly to the panels to complete the dojo theme.

This was where choosing veneer was such a smart choice. Constructed from tough and durable polypropylene, it was easy to trim the panels to size with a regular wood saw, and fit wires and mounting fixtures directly into the wall behind them. The result is truly spectacular; and the mounted fittings blend so seamlessly with the panels that it’s difficult to tell that the house wasn’t built that way originally.

If you’ve used our panels for your own basement remodeling, we’d love to see the results. Send your pictures to info@fauxpanels.com