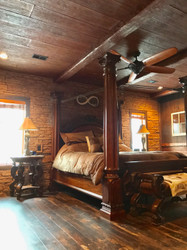 These before and after photos of a bedroom makeover demonstrate how amazing a combination of faux products can be.

We recently received these photos from a customer who chose faux wood beams for their project, and then kicked it up a notch by also ordering our wood style planks and Norwich Stone Wall panels. 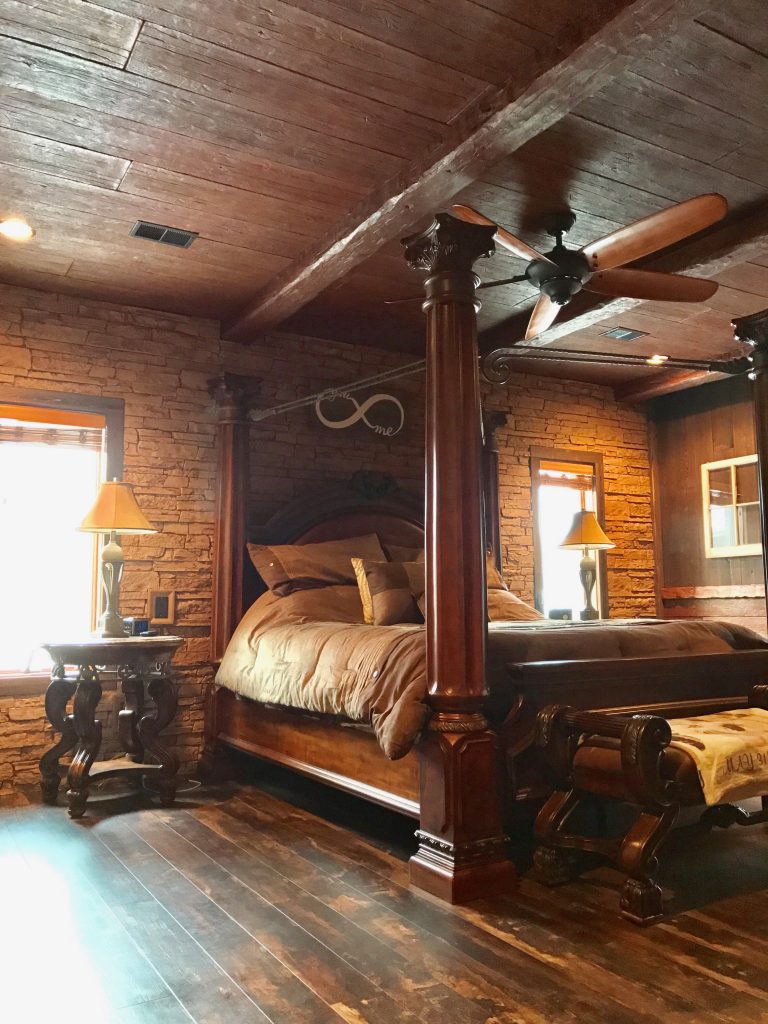 AFTER: The completed bedroom makeover is stunning.

Normally, we live by the watchword 'less is more' at FauxWoodBeams.com - arguing that sometimes the best transformation projects use only a few key products to achieve the desired look.

This project, however, is clearly one of the exceptions that proves that rule. 'Less is more' goes out of the window when you combine Stone Wall Panels in Cocoa, with our Timber Beams and Planks, all in the same room.

There are two main components to this project. The first is the use of the panels to create a stunning stone texture on the bedroom walls.

These were simple to install, using regular construction adhesive and screws. The only challenge was in trimming the panels to fit around the windows and fixtures; which is straightforward enough and requires only some accurate measurements and a regular wood saw. Faux wood trim was then added to finish the design.

Next, a combination of the planks and beams were used to create a vividly realistic farmhouse-style ceiling.

In this example, the planks were installed first -- attached directly to the ceiling with construction adhesive and screws drilled into the ceiling studs.

Again, it's a fairly straightforward process, and the only complications were trimming the planks when they reached the end of the wall. An additional trick, to get a really realistic wood look, was to offset each row of planks. This can be achieved by slicing the initial plank in half - again, using nothing more complicated than a wood saw - and installing it so it's offset against the ones either side of it. This is how floorboards were laid in real timber ceilings, and it's a subtle element that adds a whole new dimension of realism.

Once the planks were installed, next came the beams.

Our beams are hollow, and traditionally install over wooden mounting blocks attached to the ceiling studs. In this project, the installation was no different except for the fact that the mounting blocks were screwed into the ceiling studs through the planks. That required longer screws, and finding and marking the studs prior to installing the planks, but neither of those steps posed much of an obstacle.

And the result? The ceiling now looks like a vividly realistic timber roof, just like you'd find in a period home.

Together, the appearance of real wood and stone completed transformed the room; creating an incredibly character-rich decor that wows everybody who sees it. The addition of a hardwood floor just adds to that effect; turning a nice-but-dull bedroom into something you'd expect to see on a historic walking tour.

What do you think of the project? Would you have done anything differently? Let us know in the comments section below.