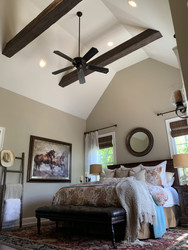 Redesigning of a Bedroom with Faux Beams

These recent customer photos demonstrate how the addition of two simple beams can transform the look of an entire room - in this case, adding some southwestern style to a modern bedroom.

When you look at the BEFORE picture, two things will probably spring to mind. Firstly, how neatly the homeowners fold their laundry. Secondly, what a gorgeous and put-together theme they have in this cathedral-ceiling bedroom.

From the huge bed with its leather ottoman at the foot of it, the beautiful Remington-style painting of prancing ponies, or the towel rack adorned with a straw vaquero hat and Navajo blanket, there's a southwestern theme to this room that really comes together; all perfectly positioned at eye-level between the door frame and curtain rods.

It's only when you look upward, to that towering ceiling, that things start to fall apart. Because this is a modern home, there's nothing structural to support the looming cathedral apex. The ceiling fan even hangs six feet down to create a false eye-level that distracts from the gaping, open space.

This is a problem many modern homes face, as the advantages of modern building materials mean that the things that would once have broken the line of sight on a ceiling like this - such as structural supporting beams - simply aren't required to bear the weight of the roof. It's one of those paradoxical 21st-century problems; in which we've actually lost something amidst all we've gained; sacrificing character for convenience.

In this bedroom, especially, the towering ceiling doesn't quite seem to fit with the timeless, classic decor. That's why the homeowners looked to us for a solution to this problem. They researched our beams and decided using them would add what modern architectural techniques had taken away.

In this case, they selected two of our Quick Ship Timber Beams in Rich Walnut color, which they used as suspended beams to span the gaping space above the bed. The homeowners researched how a roof like theirs would have been supported back in the era of structural timber, and realized that heavy cross-members would have been required to support a roof like that before the days in which steel and concrete had become so readily available.

To install a real length of timber that would span that expanse would be practically impossible. Because it wouldn't be an original, structural component, it would have to be supported by additions to the substructure of the roof; as real timber is prohibitively heavy.

Our faux beams, on the other hand, might look vividly realistic - practically indistinguishable from real wood, especially in the Rich Walnut color that these customers selected - but they're manufactured from a lightweight polyurethane foam which weighs just a fraction of what real wood does; and can be supported securely with simple mounting blocks drilled into the studs of the ceiling.

In this case, the length of the ceiling was measured out and two equidistant points were marked on the drywall - which mirrored where real timber beams would have been placed in a traditional ceiling. Next, the angle of the ceiling was carefully measured and cut into the ends of each beam; which can be done with a regular wood saw, so no specialist cutting equipment is required.

Thirdly, the aforementioned mounting blocks were attached to the studs of the ceiling, and then our hollow u-shaped beams were simply slotted over them, and secured with wood screws. Because the beams tower over ten-feet overhead, it's impossible to see the 'open' third side, which faces upward - although we also offer four-sided beams, if you want to have the complete look.

And that's it! The installation of these beams is really that straightforward, and all it takes is one look at the AFTER picture to see what an incredible difference they make to the look and feel of the room. Instantly, the previously-empty ceiling space now looks rustic, matching the southwestern theme of the room and bringing the entire decor together.

It's a very straightforward project that had a lot of thought put into planning it - proving once again that 'less is more' and you can truly transform the entire feel of a room without having to use a lot of our synthetic wood materials to do so.