A gabled ceiling makeover done with Quick Ship Rough Hewn beams shows how much you can do in a short space of time.

Nobody likes to be kept waiting - which is why we developed our line of Quick Ship Beams. These are some of our most popular styles of beams, prepared so that they can be shipped from our facility within 2 to 10 days. This enables enterprising homeowners, designers and builders to get their projects done faster. 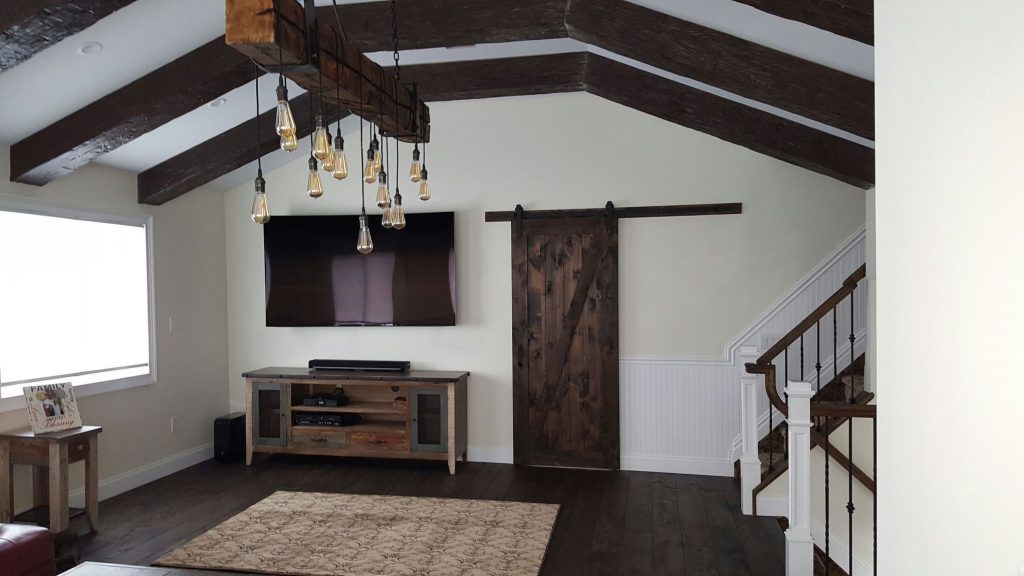 And speed certainly seemed to be the theme behind this recent customer project - which saw a room totally transformed with the installation of Quick Ship Rough Hewn Beams in Java coloring.

The room itself featured a gabled ceiling which required some thought and work to install the beams correctly. The homeowners wanted the beams to span the width of the room - rather than running down the length of it - because that would more closely resemble how real exposed timber beams might look. 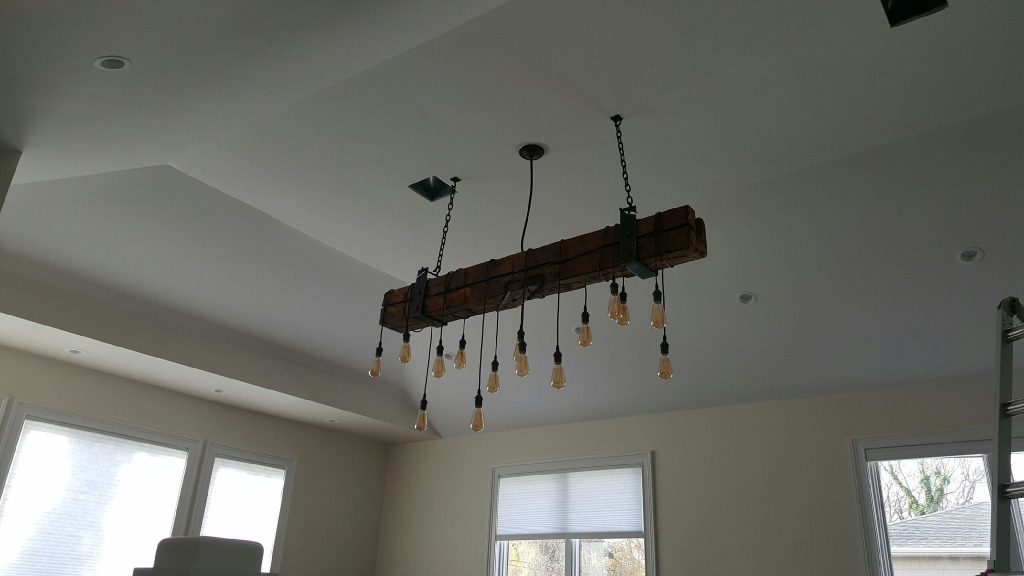 The centerpiece of the room was this stunning wooden light installation.

But the challenge there was to make sure the beams fit flush, to maintain the illusion that they were made from real wood.

The first step in achieving that was to measure and cut the beams to size. Both ends of the furthermost beams needed to be cut at an angle so one end would fit flush with the wall, and the other would press snugly against the beam going across the center of the room. 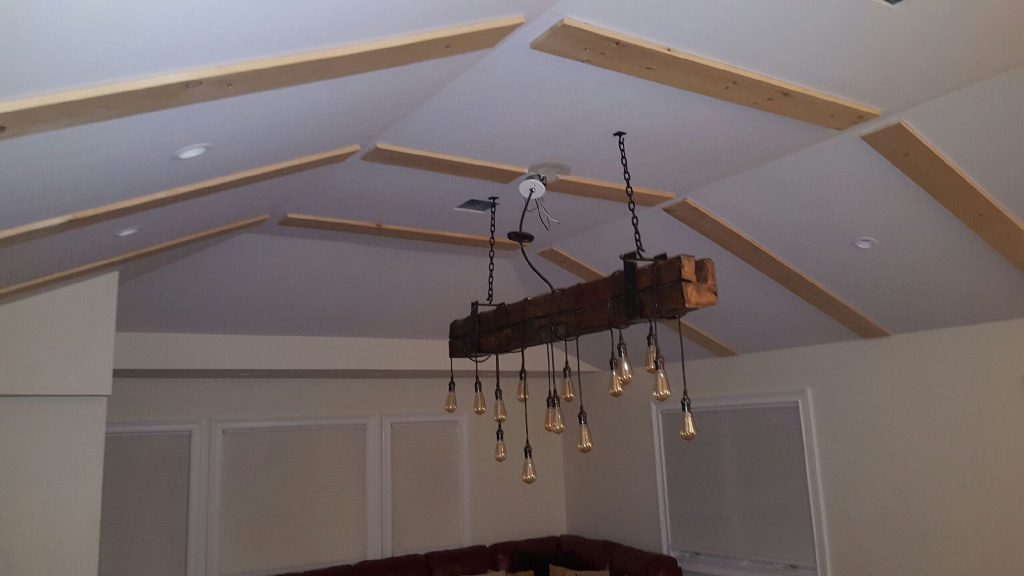 Once the beams were measured and cut, planks were installed - drilled through into the ceiling studs.

Fortunately, because our beams are made from light and durable polyurethane foam, the cutting process itself actually requires nothing more sophisticated than a regular wood saw - but the measurements had to be just right to make it work.

In this case, they were - and once the beams were cut to size, it was time to install them. 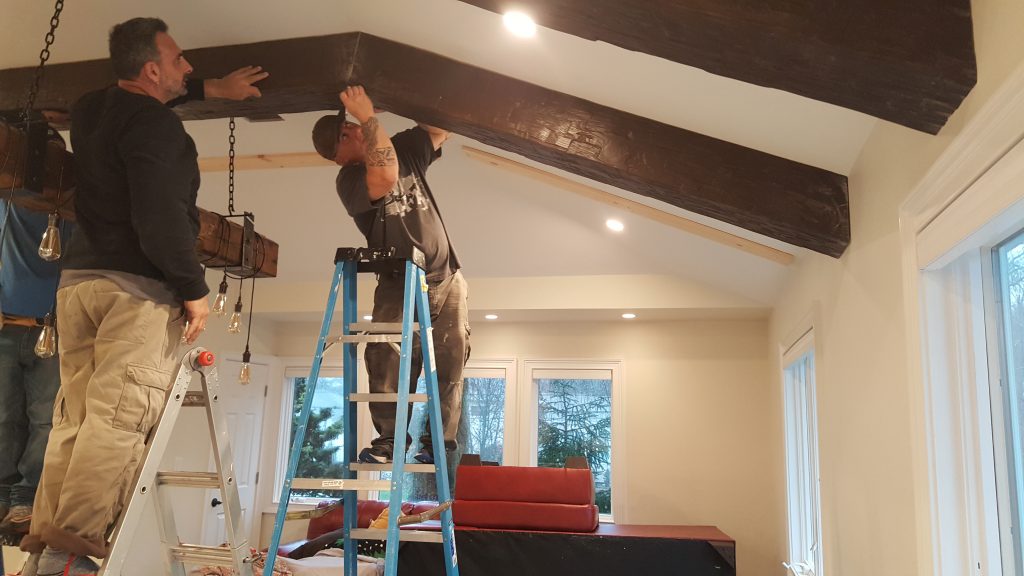 The beams were slotted over the planks and fixed into place with screws.

Usually our customers install mounting blocked into the ceiling studs to mount the beams. In this instance, lengths of plank were using instead. That gave a certain amount of additional flexibility in slotting the beams over the planks and securing them in place with regular wood screws.

The final detail was to caulk where the means met up, to ensure a seamless look - and then the installation was done!

But one more detail was added - a stunning light fixture, dangling from chains. 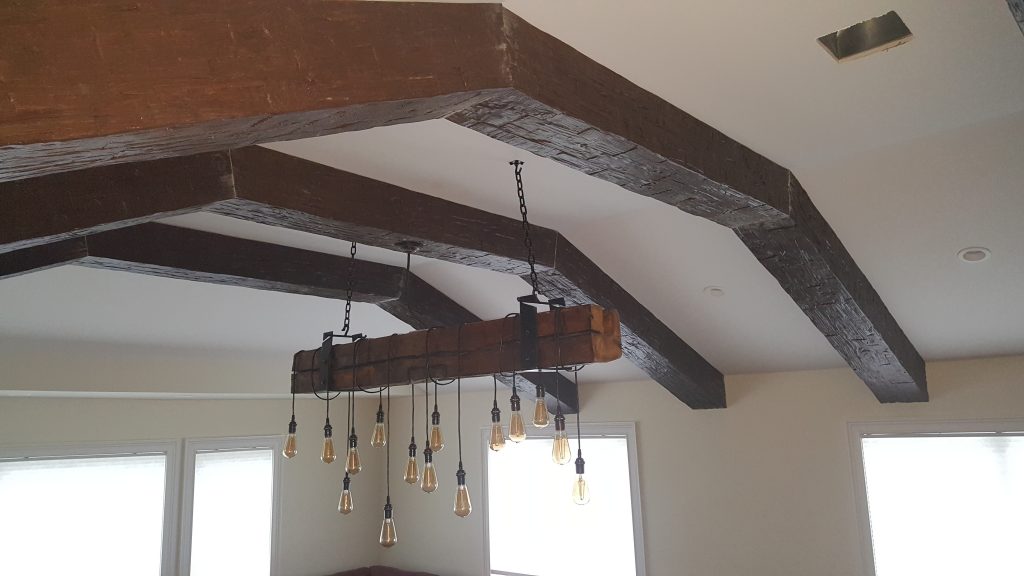 There's a cable extending from the center beam.

The lighting treatment looks great because it matches so perfectly with the beams for a cohesive look. The bulbs are powered by a cable from the original light fixture which was neatly threaded through the hollow center of the beam above.

To achieve that, a single circular hole had to be cut in the center of the beam, and a metal fitting routed the cable and covered the hole. Again, because our beams are made from high density foam, a circle hole cutter on a power drill was all that was needed to create the hole for the cable. 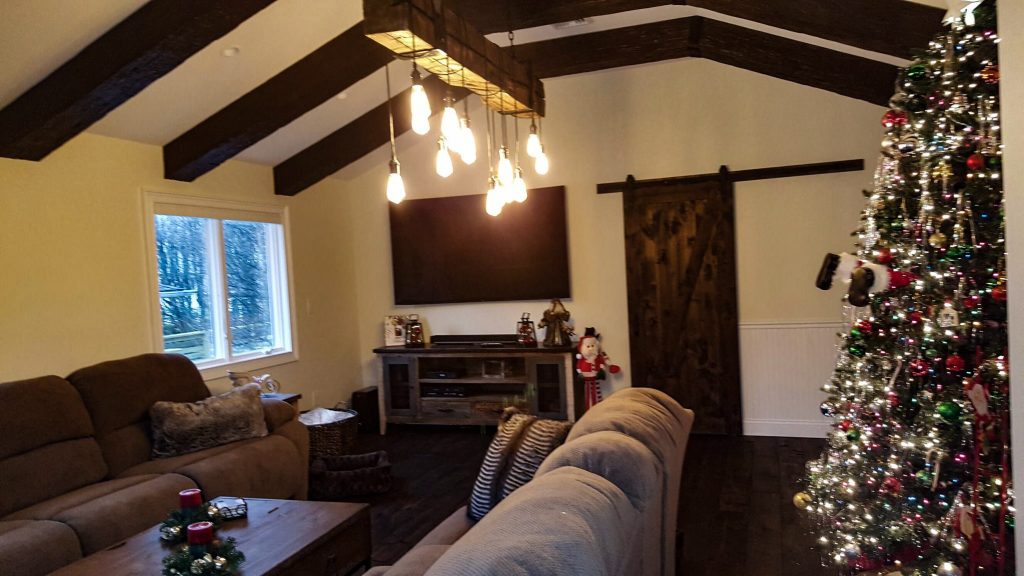 Room completed with furnishings - just in time for the holidays.

While not exactly simple, this project was certainly straightforward - and the end result looks fantastic. Not to mention that installation itself took a lot less time from order-to-installation because of our Quick Ship Beams option.

What do you think? Let us know in the comments section below.