Alan Fisher, from Arizona, talks us through the incredible outdoor kitchen he created.

Alan installed faux stone panels on concrete and wooden frames, for plenty of storage space beneath the counters

“In the beautiful Arizona desert, the kitchen makes a wonderful addition to our backyard,” Alan writes, enclosing pictures of his beautiful kitchen design. “We use the kitchen almost every night.”

“The space we used to build the kitchen is on the south side of our home.  It originally had an ugly aluminum shed there, and small tree struggling to survive.”

“The first step in building the kitchen was to remove the shed and the tree. We then leveled the ground and put in a brick patio. I followed that up by designing and building light standards out of rough-cut recycled cedar.”

“We built the kitchen itself around a large charcoal grill, custom made by my younger brother. There’s also a gas grill and a side burner.” Using those as a guide, Alan plotted out the mechanics of the kitchen itself. “We planned for the kitchen to have under-the-counter storage and tile counter tops.”

Some people might have built the counters out of brick or stone, but Alan instead decided to go for the lighter and more versatile approach of wooden framing, concrete and Oxford Stonewall panels.

“I built the framework for the kitchen counters,” he writes, “and then applied the panels to complete them. I glued the panels directly to the concrete, or screwed them to the plywood frame. Regardless of where they went, the panels went on easily and I completed the installation in just a day.”

The result was a beautiful stonework outdoor kitchen completed in a fraction of the time and budget real stone would have required – and it gets exactly the same reaction. 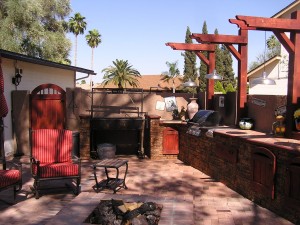 “To this day, we continue to get “ooos” and “ahhhhs” from guests that join us for cookouts in our outdoor kitchen.”

What’s really remarkable about Alan’s kitchen isn’t that it looked great when he built it, but that it continues to look great even three years later.

“The panels are exactly the same as they were the day I installed them,” he tells us. “The only maintenance I do is to spray them off regularly.”

That’s pretty impressive, given that Arizona weather can be as brutal as it is beautiful. “In the summer, the temperature in Arizona can easily reach 115 degrees – and that’s in the shade!”

The panels have also withstood some serious usage. In addition to firing up the grill just about every day to feed his family, Alan boasts: “We’ve hosted two weddings, numerous parties and countless other family gatherings - all with the kitchen as the centerpiece!”

In fact, Alan’s such a fan that he’s already planning to use the panels again.

“For my next project, I’ve removed our old redwood deck and plan to replace it with a brick patio. I’ll use faux panels to cover the cedar boards. They’ll go perfectly with the formed concrete I’m planning to use to replace the old pine benches.”

If Alan’s next project turns out to be anything as nice as his first one, we just hope he sends us pictures!