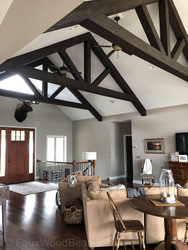 There are many different ways to incorporate faux beams with A-frame ceilings - the only limit is your imagination!

We're not talking literally when we tell you "there's more than one way to skin a cat." First off, we love cats (although we're more dog people ourselves) and secondly, if we ever used that expression, we'd just be talking metaphorically. A good case in point might be the endless possibilities offered by a traditional A-frame ceiling - there are practically limitless ways to install faux beams on an a-frame roof line (and almost none of them involve cats.) 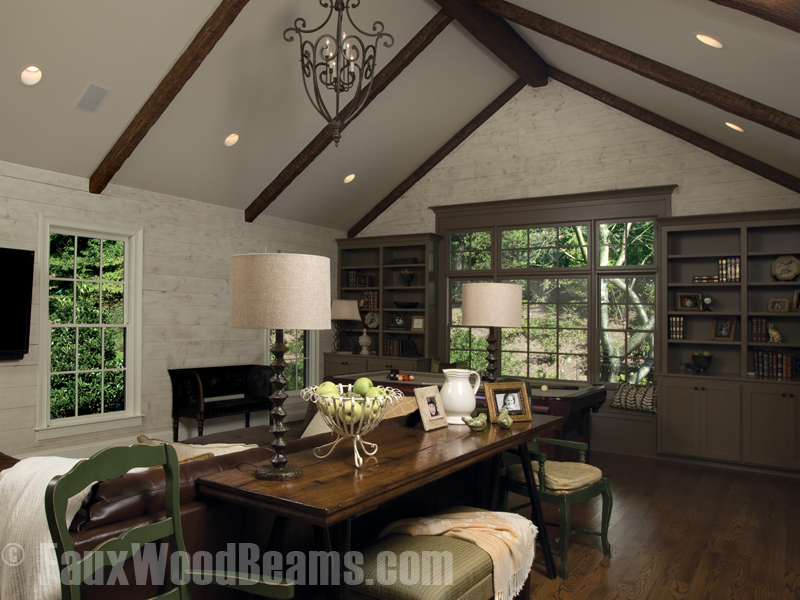 An A-Frame roof is pretty much exactly what it sounds like - a high-peaked ceiling that resembles an upper-case 'A'. It's a common roofing design in cabins and chalets, as it adds a lot of appealing ceiling height while at the same time providing a good roofing angle to protect against rain, wind and snow.

Traditionally, timber beams would have been an essential structural component of any A-framed roof line, and many such homes would have exposed beams in the interior. This picture, from traditional timber framers Oakwrights, in Hereford, England, demonstrates how supporting timber beams can often make attractive interior decor features.

Oakwrights is a British company that designs traditional oak-frame houses.

When you're using slightly more modern (and less expensive) materials to build your home, though, installing beams isn't often quite so simple an option. Large, wooden timbers aren't part of the structural components of a home (framing structures, or steel beams have replaced them) and therefore an A-frame roof line appears as a sleek, clean, boring drywall ceiling from the interior.

That's why many homeowners are choosing to 'go faux' with beams from Barron Designs. Adding wooden beams helps break up the wide expanse of drywall, and makes a home appear older and more characterful than it would otherwise. But the question is - how can you incorporate beams in an A-frame ceiling if there was never any need for such structural supports in the first place?

Well, the secret to that is the same for any successful installation - research. Researching how real timber beams would have been used in a similar-style construction allows you to plot out options to install them that look 'right' with the design.

This photo is from home-building company JG Hale Construction, based in Blaenavon, Wales. It demonstrates how beams are used structurally to create an A-Framed ceiling. It's interesting because you can see how beams run both horizontally and vertically along the line of the ceiling; and that gives designers several options for installing their faux beams to match. 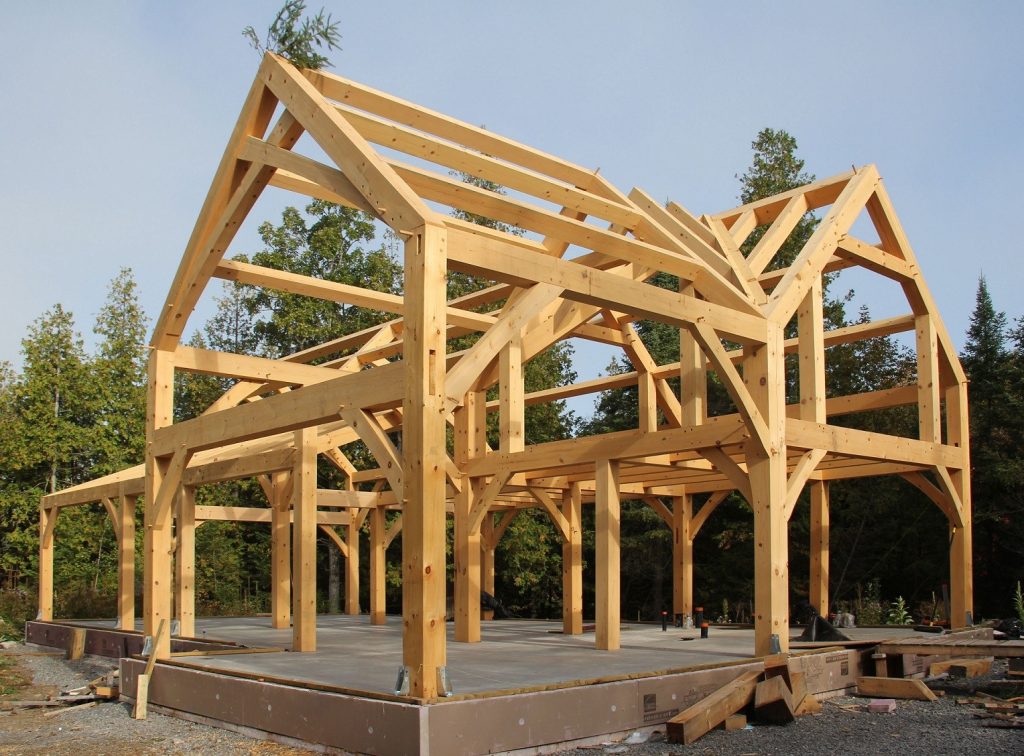 Check out those vertical beams, running straight up from the bottom of the ceiling, to the apex at the top. A common design would be to install beams in a similar configuration - running several parallel to each other to mimic how vertical structural beams could have been exposed in an A-Frame ceiling. This kitchen renovation project was done using Custom Timber Beams. 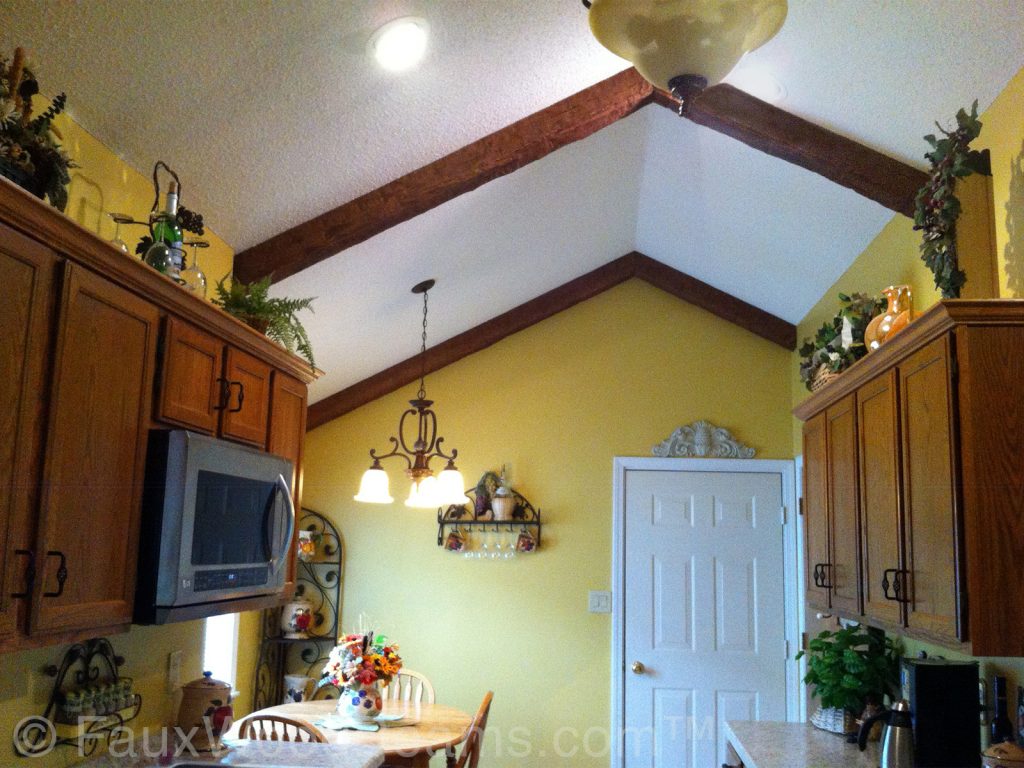 These vertical beams mimic the way real timber would have been used to make a similar, A-Frame roof.

Taking that same approach a step further involves adding a second beam element - one that runs right across the center of the ceiling. This mimics the look of the central, structural supporting timber that the vertical timbers would be supporting. 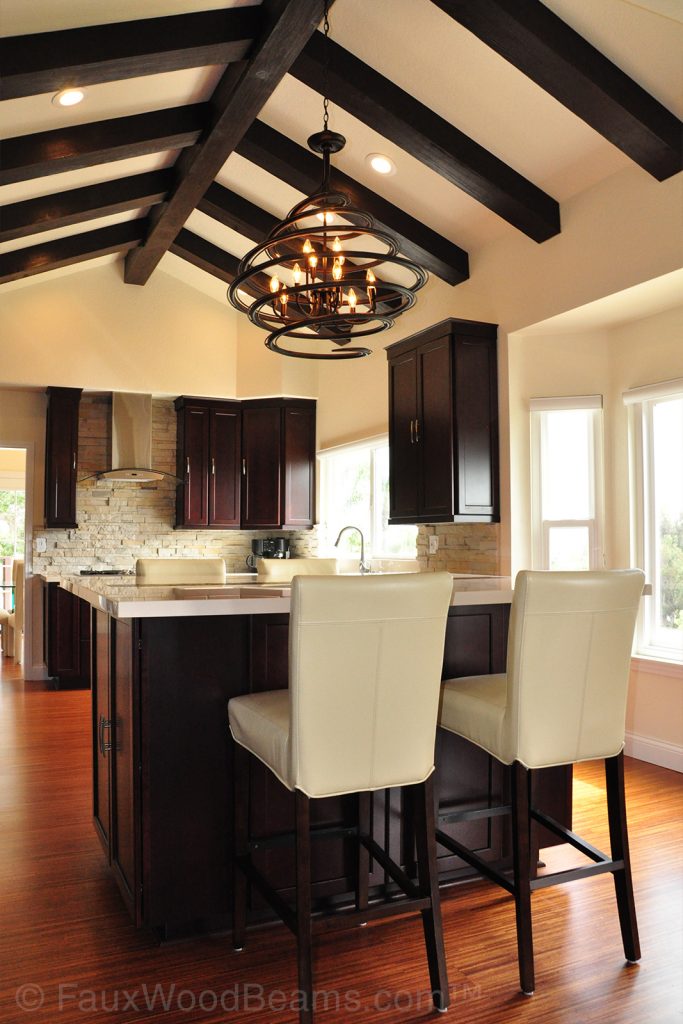 Both of these approaches are fairly straightforward when it comes to using our beams. The most important step is to carefully measure equidistant points across the span of the ceiling. Then wooden mounting blocks are drilled straight though into the ceiling studs beneath the drywall, and the hollow u-shaped beams are simply slotted over them, and secured with wood screws.

The biggest challenge is to cut the ends at an angle to fit flush with the base of the ceiling, and whatever element you feature at the center of the roof line. It could be the end of another beam, or a larger, central beam.

Fortunately, our beams are made from a durable polyurethane foam, and cutting them at an angle requires nothing more than a wood saw and some accurate measurements.

Another option is to focus on the horizontal, rather than vertical beams. This is similar to the configuration of a real timber A-Frame we featured in the second photo. To to this, you'd install your beams horizontally across the ceiling, and around the edges and apex. This would look as if the home builder had simply exposed a different layer of beams.

This photo shows a bedroom with a single length of beam at the apex of the room, and another running along the base of the ceiling, to mirror how horizontal beams would have been used to build the angled roof.

A final and more ambitious solution is to go right back to basics, and look at how some of the most sturdy timber buildings were originally designed. In the past, because of the limitations of materials available, A-Framed roofing didn't have the open space inside that it often does now. Instead, sturdy supporting timber trusses would have stretched from one wall to the other, to support the weight of the roof above.

Because our beams are lightweight, easy to cut, and come in all sorts of sizes and lengths, the are ideal for manufacturing a decorative truss in your modern home, to mimic how a structural one might look. Trusses come in all shapes and sizes, as you can see!

You can make yours as complicated or simple as you like - but as you can see from this picture below, even a simple truss can look incredibly dramatic. 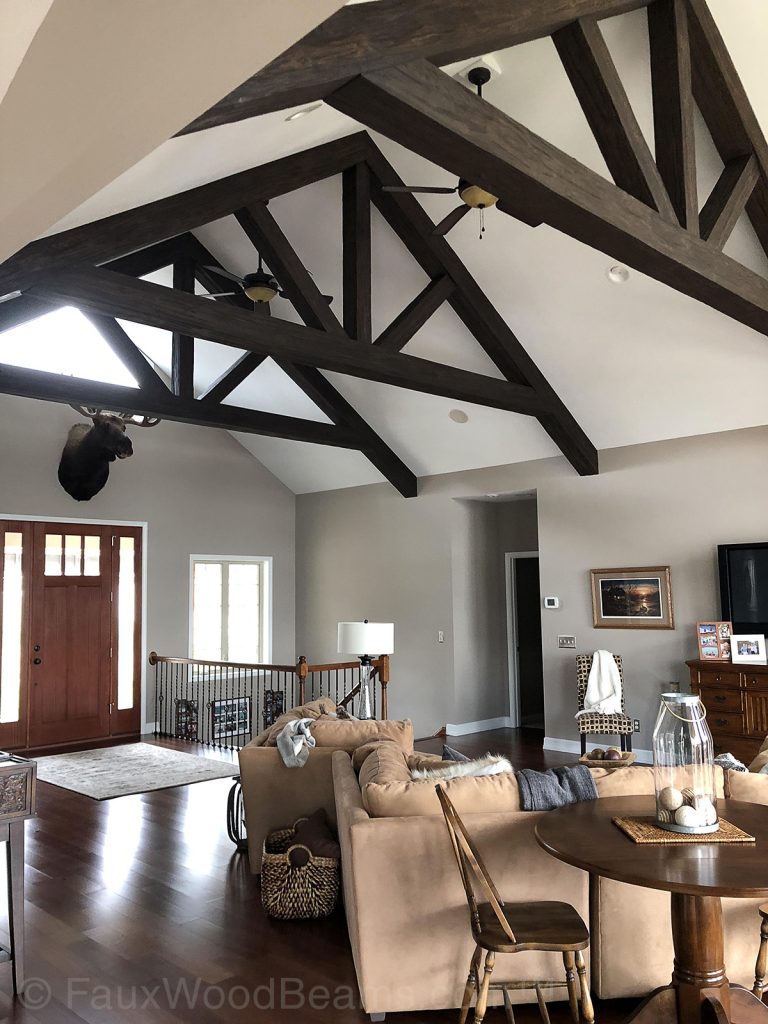 These elegant A-frame trusses are faux - made with Custom Timber Beams.

This is a very brief overview, but as you can see - there are many ways to creatively use faux beams as decorative elements on your A-frame ceiling.

The golden rule, though, remains research. Whether you choose horizontal beams, or vertical ones, or even opt for a custom truss configuration - make sure it's congruent with how real builders would have used beams in their construction; as that's the secret to making your project look fantastic.