Kevin and Cyndi loved their two-story cabin from the moment they bought it – with its stunning view of unspoiled national forestland and tall peaked ceiling. But despite the stunning location and architecture, Kevin thought there was room for improvement. 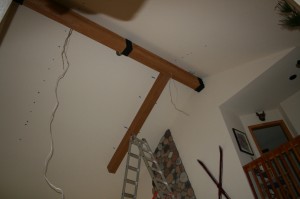 Kevin's ceiling was a towering 22ft tall. This is why faux beams, often weighing less than 20lbs, are so practical to install.

“The family room has a 22ft peaked ceiling,” Kevin explained, “so my goal was to fill in this dead-space, as well as continue the wood and rock theme that we used throughout the cabin.”

Kevin’s solution was to build a wood truss, which would fill in the dead space and add some character and shape to the peaked ceiling. The sheer scale of the project, however, immediately presented challenges.

“The biggest issue was the height of the ceiling,” Kevin explains. “At 22 ft, it was almost impossible to even take measurements up there. Plus the walls are made of drywall, which is attached to studs.”

Given the awkward positioning, and the way the ceiling was designed, using real wood beams to build the truss seemed impossible.

But Kevin proved that impossibility is a limit we often set ourselves – and so he still managed to get exactly the look he wanted by scoping out the use of faux beams instead. 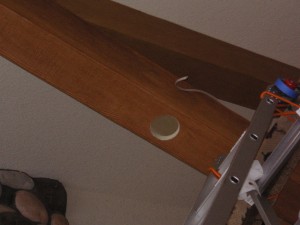 “I spoke with Jeff at www.FauxWoodBeams.com and he was able to discern exactly what I wanted to do very quickly with some sketches. Using those, he was able to efficiently reduce the cost of my project.”

In addition to the dramatically reduced cost and increased practicality of using faux beams rather than real timber, Kevin quickly realized another advantage in using faux wood over the real thing.

“I was also in desperate need to add more light sources to the room since there were no ceiling lights installed and the room was dark, even with floor lamps on.” The u-shape of hollow faux wood beams meant they’re perfect for running wire invisibly through, and Kevin was able to install recessed lighting to bring a little brightness to the family room.

“I drilled 4 holes in each beam to attach the recessed lights. They simply clipped in – although it was handy to have access from the top when they didn’t seat perfectly. I wired all of these together with twist caps and attached and checked the wiring.”

Only one thing went wrong. “One wrong set of bulbs sent me back to Home Depot,” Kevin admits, “where they by now knew me on a first name basis!” 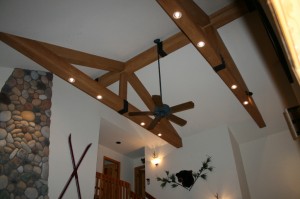 The end results of Kevin's wood truss design were nothing short of spectacular.

What was especially impressive about this project was that Kevin managed to do the entire thing practically by himself (although he admits “my lovely wife was a trooper and held up beams while I drilled – the dog barking and my little daughter wandering around below us, oblivious to the imminent danger above!)

He also illustrated the amazing potential of faux ceiling beams in his truss design project. They look stunning used as roof beams, but can easily be adapted for even more ambitious projects – just like Kevin’s.

The end result looks stunning – as if the wood truss had been in place almost as long as the family room’s wooden stairs. This is because Kevin ordered his faux beams unfinished, and stained them to match the existing stairs.

You can read a fuller account of Kevin’s remarkable truss building project on our wood truss design page; and if you start on a similar endeavor, would love to hear about it and see pictures of your project.