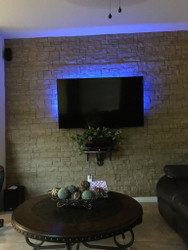 Flatscreens have changed everything for TV wall design.

Back in the old days (not that old, I'd like to point out) televisions were immense and heavy things, with cathode ray tubes that meant the screens were as long as they were wide. The idea of a 'flatscreen' often involved cutting a hole in your wall and inserting the TV itself, to make the screen appear flush with the wall. 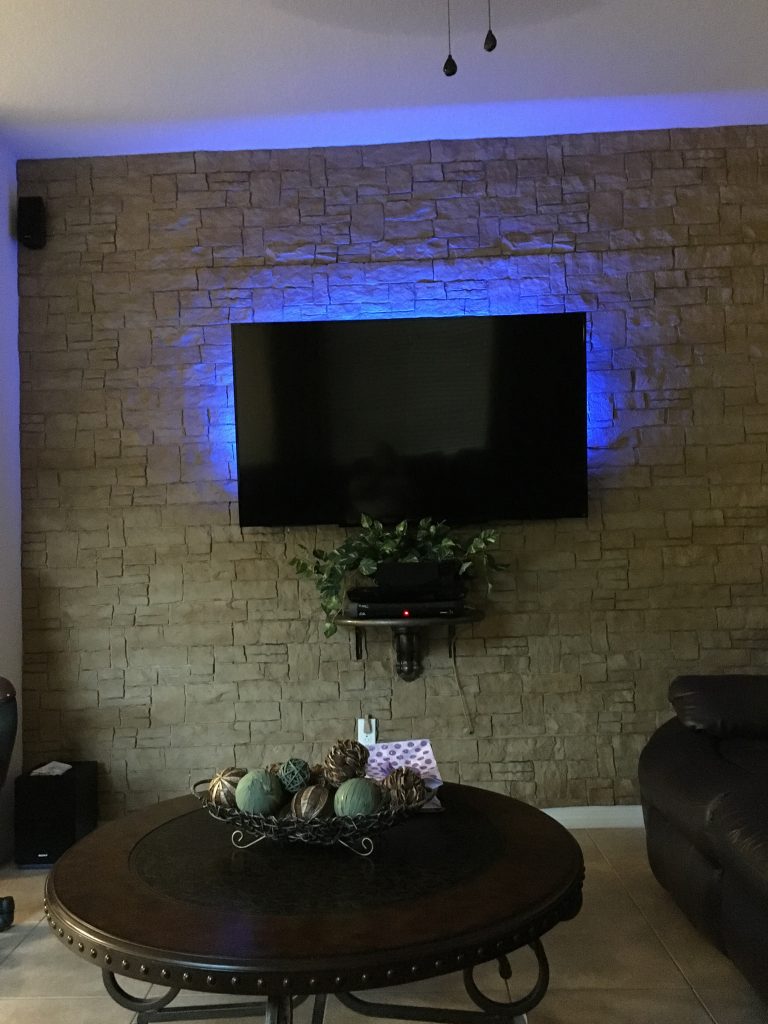 AFTER: A beautiful TV wall design created with Stonewall panels

But now flatscreen TVs hang just like a picture; and with HD now hitting the mainstream, the picture's crisper and clearer than ever.

One trick home theater enthusiasts have devised to make a flatscreen look even better is a back light around the screen itself. Similar to what they do in a cinema, a colored LED back light can create a 'halo' around a screen and make the picture appear even more dramatic and crisp.

FauxPanels.com customer Armando Diaz recently sent us pictures of his project which incorporated this element. He wanted to brighten up his living room, and frame his TV in a new and original way. An LED light seemed like the perfect solution. 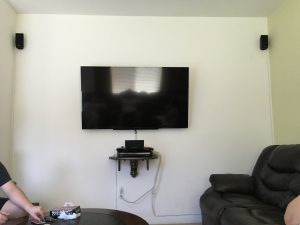 BEFORE: Totally basic, and the cables were ugly and plain to see.

There were other considerations as well. As you can see from the 'before' picture, Armando had a nest of wires snaking across the wall, leading to his cable box and TV. That was unattractive and impractical. Our panels offered a solution.

His solution was to order our Novi Stonewall Terra panels. Vividly molded from authentic stone walls, the panels installed directly onto the wall of Armando's living room with construction adhesive and screws. More than that, he was able to run the wires for his TV and cable box underneath the panels; totally hiding them.

The installation was straightforward. Armando had to measure and account for where the hidden wires would run, and create a hole to allow the cables out. You can see it in the photo - practically invisible, compared to the snaking wires from the 'before' picture.

He also had to measure and cut the panels to fit the length of his wall. Because our panels are made from high density polyurethane it was actually surprisingly easy to do that. All it took were measurements, and a regular wood saw.

The complication came in off-setting the second row of panels, which sit above the first. In order to eliminate any duplicate patterns in the stone texture, Armando cut the lead panel in half to off-set the row of panels just enough to make the seamless stonework pattern appear as random as real stone would.

The final detail was to re-install the ornate shelf where the cable box sat. This was simple enough, because Armando could drill straight through the installed panels to the studs beneath; making the shelf just as sturdy as it was before.

It was a simple concept, but executed beautifully - and the final detail was the backlit LED. That's where the real genius of Armando's design emerged. Rather than a bland, boring plain white wall like the one that had been there before, the texture on the Stonwall panels lit up beautifully under the color-LED. It made the TV appear truly cinematic; and really demonstrated the vividly realistic texture of our panels.

We think this was a great project, and are excited to share it with you. What do you think of it? Let us know in the comments below.