Jenny, a Brit living in America for 30 years, is very particular about her home. That’s why she chose our faux planks to help restore it.

Building and Renovating with Faux Planks for Tudor-Style Homes

“There’s no such thing as a ‘Tudor home’ in America,” says Jenny Raymond, whose British accent is still crisp and clear even after 30-years of living in Princeton, New Jersey.

Chester High Street, in the UK, is lined with authentic Tudor buildings.

“Tudor homes were houses built in the Tudor period – when Henry VIII or Elizabeth I were on the throne. Everything that came after that is ‘mock Tudor’ or ‘Tudorbethan’. That includes every so-called ‘Tudor’ home in America.”

Jenny is very definite about that point – possibly because she’s a history teacher at a local prep school. Nevertheless, even while she argues that they’re not ‘authentic’, she still admits that she loves the look of these homes; and is passionate about the small Tudor style townhouse she shares with her husband in the center of Princeton.

“I love the style because it reminds me of home,” she explains. “I used to live in a town called Chester and the High Street was lined with beautiful Tudor buildings that dated back centuries.” 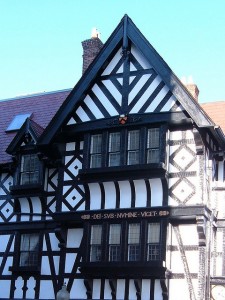 Her home in America isn’t quite so venerable; being built at around the turn of the 20th century and only later updated with wooden planking and ledgers. “It still looks great.”

Recently, Jenny and her husband noticed some of the planks were rotting – and they reached out to FauxWoodBeams.com to help.

“As far as we can tell, all the wooden planking on the home is original,” she explains, “which probably means it’s at least fifty or sixty years old. Just last autumn, we noticed that some of the planks on the front of the house were peeling off the wall and crumbling.”

Jenny considered all the different alternatives to repair the damage; and eventually settled on faux wood planks.

“Our first instinct was to stick with real wood,” she explains, “but when we asked for a sample from FauxWoodBeams.com I realized that it really did look just as good as the real thing.”

In fact, our products are a popular choice for making Tudor style homes.

Perhaps this is because our planks are even cheaper and a more durable than the real thing. Made from molded polyurethane, all of our faux products are 100% waterproof and weatherproof – which make them a great replacement for actual wood. 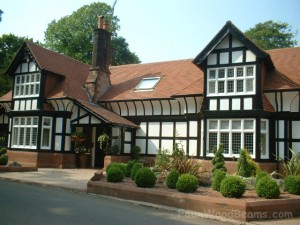 While Jenny used faux planks for repairs, other customers have used them on their entire Tudor style homes.

The fit was great; but did present Jenny with one final challenge.

“Our home was decorated in the Tudor revival style pioneered the late 1800s,” Jenny explains. 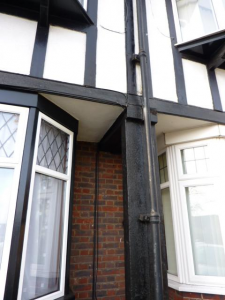 The front of Jenny's home was detailed with authentic wood; she used faux planks to replace those pieces that had rotted.

“That meant the original wooden planking was painted gloss black. We did the same thing with the faux versions we bought, but that made them stand out against the faded black paint of the rest of the house!”

To complete the project, Jenny’s husband hit the stepladder once again and gave all the planking on the front of the house a new coat of shiny black paint.

“We’re converts to the brand now,” Jenny proudly admits. “When we next have to start replacing the planks, we’ll definitely be using your product.”

If you’ve used our products to create your own mock-Tudor masterpiece, we’d love to share pictures with other customers. Email them to info@fauxwoodbeams.com.