Most of our customers choose faux beams because they perfectly capture the rustic look of traditional timber. Available in several wood-colored shades – from walnut to cedar – you can also order them unfinished and stain them yourself to match the rest of the wood in your home.

But one of the ceiling ideas that’s catching on is painting the beams; creating a bold new look that adds a new dimension of versatility to our products.

To most people, the idea of painting beams might sound strange. After all, recreating the look of wood or timber is the top reason why people install our beams in the first place.

But there are a number of reasons why painted ceiling beams could be just the look you’re going for. If you want to know why, look no further than the real timber beams used in historic houses across the East Coast and back in Europe.

For over a century, it was actually common for homeowners to paint their beams a lighter color; rather than keep them bare. This was often to make a room appear lighter and more open during an era in which electric lights hadn’t been invented yet.

In fact, the “traditional” look of naked wooden beams is actually a fairly recent interior design concept; attempting to recreate an old world look that might have never really existed in the first place.

So looking beyond the ordinary, today’s homeowners might want to consider painting their beams to match their walls or ceiling, rather than their hard wood flooring. There are a number of reasons why: 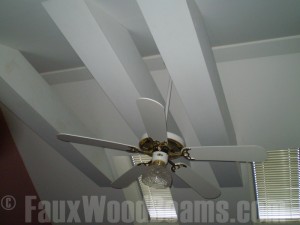 Painting and staining faux beams is a simple process. Almost all of our beams can be ordered unfinished or pre-primed, and then painted with high quality water based paint in the desired shade.

For only a couple of our products, like the Timber or Sandblasted style, will you’ll need to use an acrylic all-purpose primer first. The rest can be painted straight out of the box.

For a good look at how one of our customers used regular paint to finish our beams, check out Frank’s story.