Question: Can I hang stuff on a faux beam? Like a swag lamp or planter, or even a ceiling fan?

Answer: Only if you attach it to a solid anchor inside the beam.

Polyurethane beams are tough and durable, but they don't have the holding power and rigidity to carry additional weight on their own. 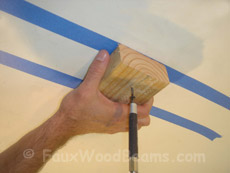 It's tempting to think of attaching a ceiling hook to the bottom of the beam with a toggle bolt, just as you would to a drywall ceiling, and hanging a plant or swag fixture on it. Resist the temptation.

The right time to think about hanging things from a beam is when you're installing the beam. Imagine where you might eventually want to hang that planter or swag, and provide solid backing inside the beam at that location. 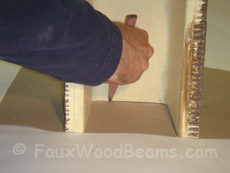 First attach a mounting block to the ceiling, screwed into a ceiling joist if possible. Then cut a backer block that just fits inside the beam, and screw that block to the side of the mounting block. Don't forget to write down its location for later reference ("24.5 inches from the west wall"). Then you'll be able to screw your ceiling hook through the beam and directly into that solid backer block. 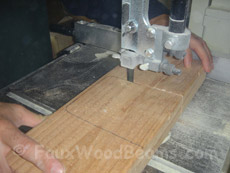 What about permanent light fixtures or ceiling fans? Since they require electrical boxes, you need to plan and install them at the same time you install the beam. 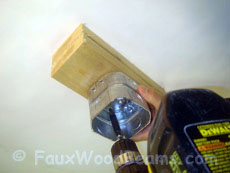 You'll find complete instructions for mounting a chandelier or hanging light fixture on our website. For a ceiling fan, follow the same instructions, but make sure you attach the anchoring blocks directly to a wood joist and not just to the surface of the ceiling.