The right finishing touches can make a good project into a great one. Did I hear someone say \"Straps"? You use straps to cover end-to-end joints between beams. You can also use them where a beam butts into the side of another beam, where a beam meets a wall, and at intervals along a beam. The photos show some possibilities.

There are three kinds of straps. 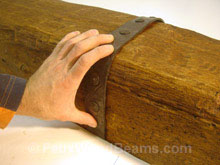 The first kind is made of heavy black rubber with hammered nailheads molded into it. It comes in a roll, and you simply cut it to length with scissors and glue it in place. You can wrap it around the sides of a beam or use it as a flat plate. Use the wide strap with two rows of nailheads (model S-02) for big beams and for end-to-end joints. Use the narrow strap with a single row of nailheads (model S-01) for smaller beams and joints. 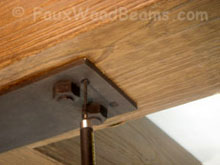 The second kind of strap is a universal rigid straight strap with molded bolt heads or nuts (models DS-412A and DS-412B). You attach them with small screws, which you hide with putty. Use a bolt-head plate across the bottom surface of two beams where they meet in a T. Or use a pair of plates, one with bolt heads and one with nuts, on opposite sides of a truss or similar joint. 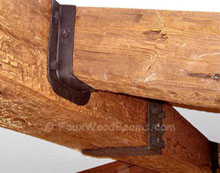 The third kind of strap is a rigid U made for a specific beam design (such as Rustic) and size. These straps have the look of wrought iron but are lightweight like the faux beams. Some designs include variations such as a beam-end hanger and a chevron-cut strap for the peak of a cathedral ceiling. You attach them with glue and small screws.

The right straps will make your project glow. 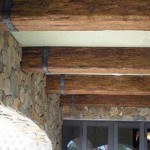 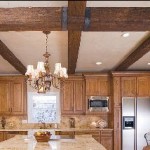 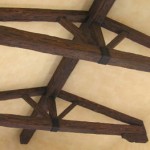