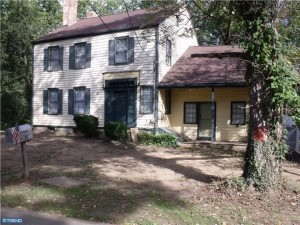 Brett and Tina's historic home had some major structural issues to contend with.

"It's our passion," explains Brett. "Over the last fifteen years, we've fixed up five different properties, in both Chicago and Pennsylvania."

But their latest project was the most ambitious - an original 1740s farmhouse in Bucks County, Pennsylvania, which required total renovation.

"It is the most beautiful house," Brett explains, "but absolutely untouched for thirty years." So much so that there's no insulation, no modern conveniences and even the electrics were installed after-the-fact in the 1930s.

But while none of those obstacles concerned Brett and Tina, one problem arose after they'd bought the house that threatened to send their dream crashing around their ears - literally. 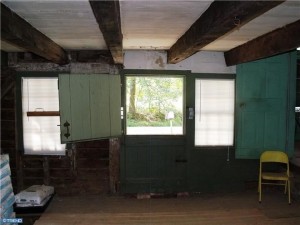 Because it's still a work in progress, Brett doesn't have any pictures of our beams in situ. But this shot illustrates the prominence of the exposed beams in another part of the house.

"It didn't come up in the inspection," Brett writes, "but there was some major structural damage with the beams that made up the roof of the kitchen." Due to the age and complexity of the house, fixing the issue using real wood and timber would have essentially required gutting the entire house - "essentially rebuilding it."

After long negotiations with building code officials, and the local historical society, a compromise was reached.

"We were able to replace part of the structural frame of the house with steel beams," Brett explains. "They would be enough to make sure the house kept standing for another two hundred and seventy years - but it presented a problem."

The narrow steel beams, while strong, replaced the beautiful exposed wooden beams in the kitchen of the old house.

"I didn't know what to do," Brett writes. "They were part of the reason we fell in love with the house in the first place; and an essential part of the historic "look" we were going for.

Options for replacing those beams were limited. Real timber would have been not just expensive, but difficult to install given the already difficult structural issues with the home. Going without would have looked horrible - and seriously hurt the property value. "We would have struggled to break even on the home," Brett admits.

"In the end, my wife discovered your products - and it looked like we had a solution."

Lightweight and easy to install, faux beams offered a way to give the illusion of real exposed beams without the cost or difficulty of installing the real thing: "And they look amazing - practically indistinguishable from the real thing."

Even better, they attached to the low kitchen room with regular screws and wooden mounting blocks; adding no structural burden to the house. Because they're hollow, Brett and Tina were even able to run wire through them; hiding some of the wires that had originally been fitted in the 1930s (and nailed directly to the wall.)

"Your beams definitely saved our investment," Brett admits - "if not the home itself. If we go for another historic restoration after this one, your products are going to be top of the list of renovation materials."