In almost every way, faux panels are equal or superior to the 'real thing'. But recently, one customer had an experience we thought was worth sharing (once we could confirm a 'happy ending.') 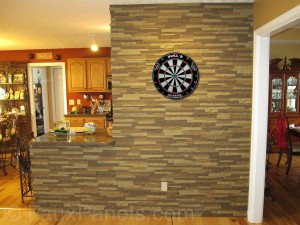 The panels look like stone; but even we can admit they don't hold up to darts quite as well.

Rob Clark from Scranton, PA rents out properties in the Poconos during the ski season, and used Windsor Stacked Stone panels in several of them to add a touch of style.

But a recent rental by a bunch of college kids presented a problem. In his property, beer-fueled students had decided to move the dart board hanging up in the garage to the living room instead; unaware that the 'stone' they were hanging it from wasn't authentic.

The result? When darts missed the board entirely (which, when you're playing while drinking beer, happens quite a lot) they didn't just bounce off the stone. Instead, they sunk into the high density polyurethane foam that the panels are molded from.

"When we went to clean up the rental property," Rob explained, "we were horrified to find dozens of little holes punched into the accent wall. You'd think after the first time a dart got embedded into the panels, they'd have stopped - but instead it looks like they played like that all night!"

It was an infuriating discovery; and the students lost their rental deposit as a result. But for Rob, the question was: How can you repair the damage?

"I reached out to you guys for options, and was happy I did!" 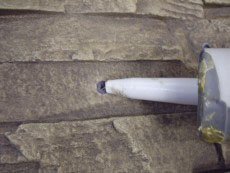 We offer caulk to suit almost every product in our lineup, and perform almost seamless repairs cheaply and effectively.

Fortunately, we've already got a strategy in place for dealing with holes in faux panels - although normally, they're put there for non-recreational purposes! Whether using screws for installation, or cutting or drilling them to size and shape, there are often situations in which you need to cover up damage to the original panel.

We offer a range of colored caulks exactly for that purpose. They can be applied to the holes, and seamlessly cover up the damage. Admittedly, they were never designed to cover up quite as many little holes as Rob encountered; but he was happy with the result.

"It's not perfect," he admits, "but it's more than enough to cover the damage at a glance." He was happy enough that he didn't go down the other route - buying a whole new panel. "And even that isn't an outrageous suggestion," he admits. "Fortunately your products are fairly affordable, so the deposit I kept would have easily covered that."

In any result, Rob's property was rental-ready just a couple of days later - and having learned from the experience, the offending dart board has been deposited in the garbage.

"I was lucky it wasn't a more expensive lesson," he admits.