There's nothing more satisfying than a job well done - especially if you've been waiting a long time to complete it. It took FauxwoodBeams.com customer Caryn Pacella more than a year to get around to this project, dividing her open plan living room with suspended beams. But as you can see, the end result was worth the wait! 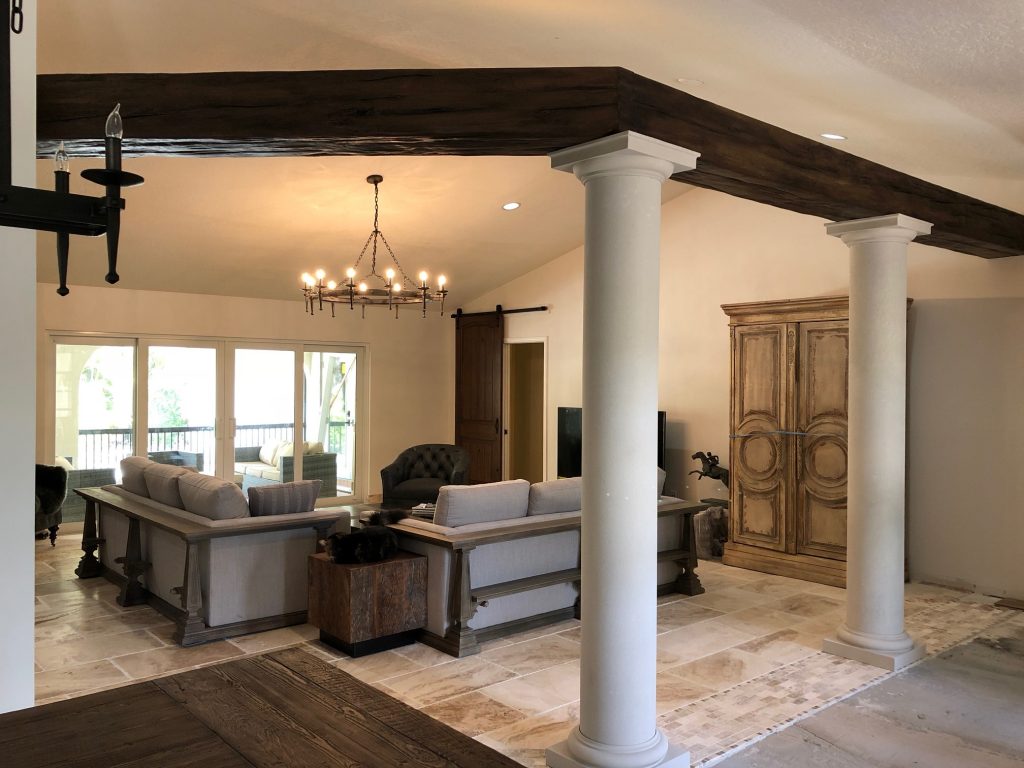 I think we all suffer from our periods of procrastination - and it's a documented psychological fact that the bigger the project you're planning to embark on, the more tempting it is to put it off. That was certainly the case with the ambitious beam project that Caryn intended to start more than a year ago.

Caryn's stunning home features beautiful real wood furniture, and stunning stonework reminiscent of a medieval castle. She's truly managed to combine the classical and contemporary, and her home has a bright, fresh finish that's deliciously contrasted by the accents of dark wood.

The  pièce de résistance was intended to be an immense suspended wooden beam, following the line of the ceiling in a way that looked organic, authentic and broke apart the dining area from the living room. Caryn planned to support the beam on replica stone columns, and it promised to add a really dramatic, but congruent element to her home.

Yet what you envision, and what you do are two separate things - and after months and months of putting the project off while other more urgent things came up, Caryn checked her calendar and saw that it had been almost a year since she'd originally bought our Custom Timber Beams to complete her project.

It was time to do something about it. 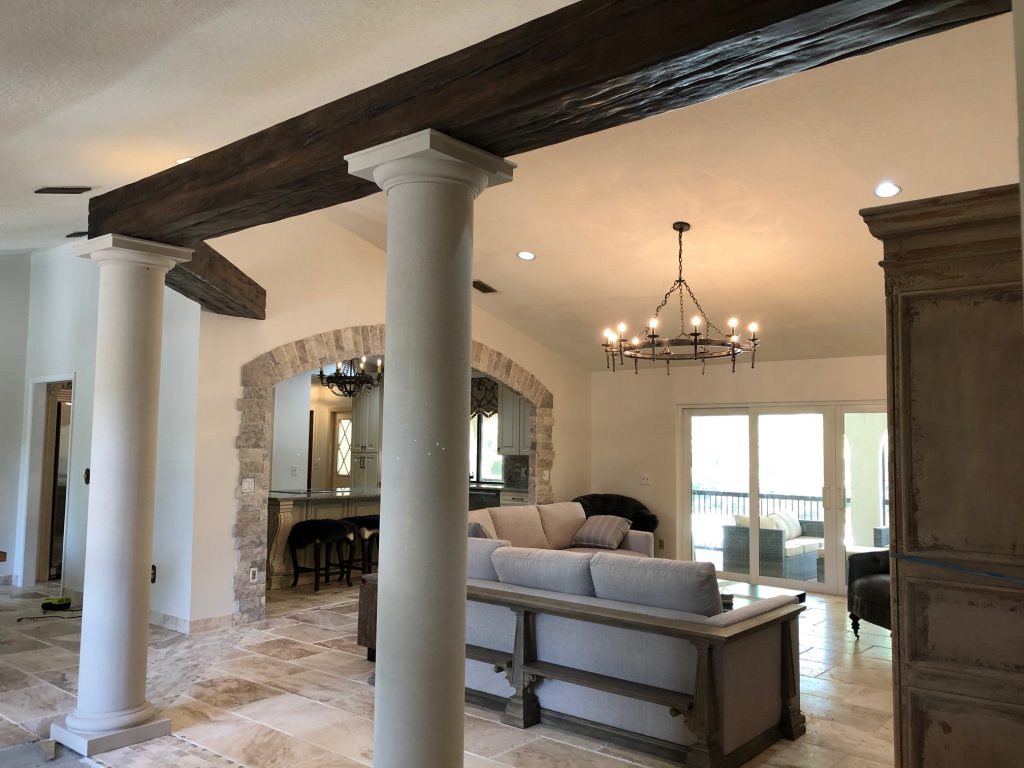 The suspended beams follow the natural divide between the living room and the adjoining area.

And, as these photos demonstrate, once she put her mind to it, Caryn didn't fall short.

This is the sort of project we really love to feature on the blog because it is very distinctive, unique and clever. We've featured suspended beams before - stretching from one wall to the other with a gap above them. However, this is different. The project features three lengths of beam, and each one had to be cut and angled to fit seamlessly together.

The beams are secured to either wall with mounting blocks drilled into the studs, which is fairly standard for any suspended beam project. However, unlike a straight beam - which can generally support its full length with mountings at either end - the angled path of these beams meant that they required additional support. 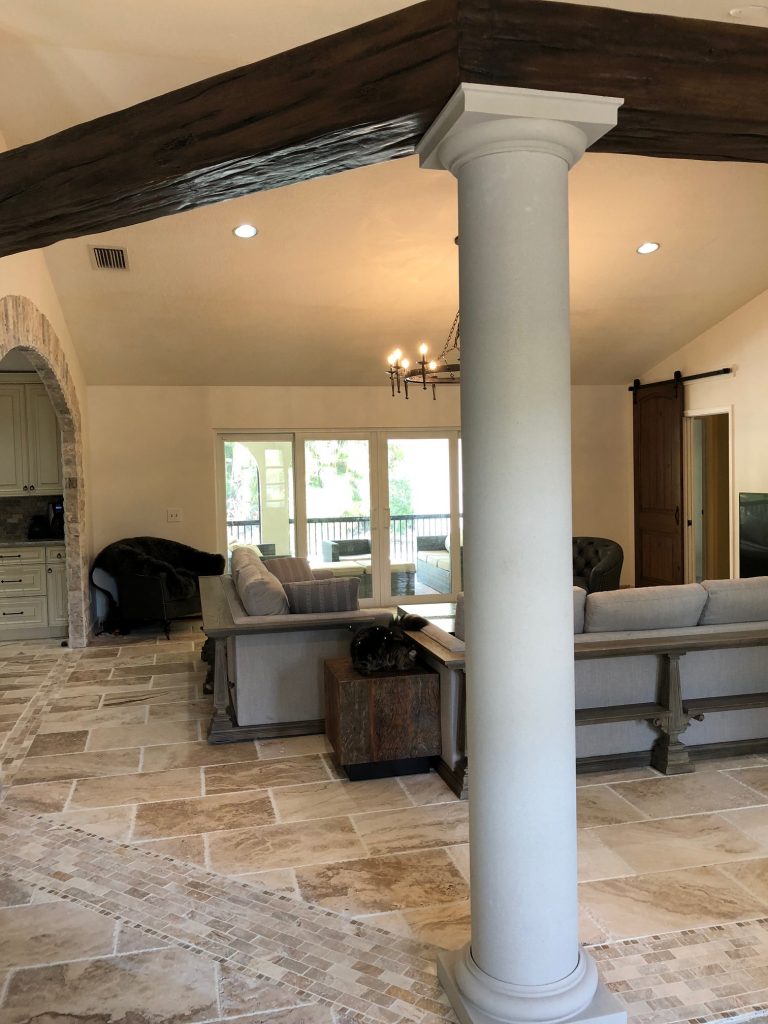 Replica stone columns support the beams, and offer another design element to separate the two spaces.

Fortunately, that was exactly what Caryn had planned when she first conceived the idea. She used replica stone columns to support the length of beam at key points, to prevent the suspended length cracking, dropping or snapping.

This separates the living room area from the surrounding rooms; and in a way that evokes classic architecture and traditional building techniques, while keeping the general open-plan feel of the room. It's a very clever concept that Caryn executed perfectly. 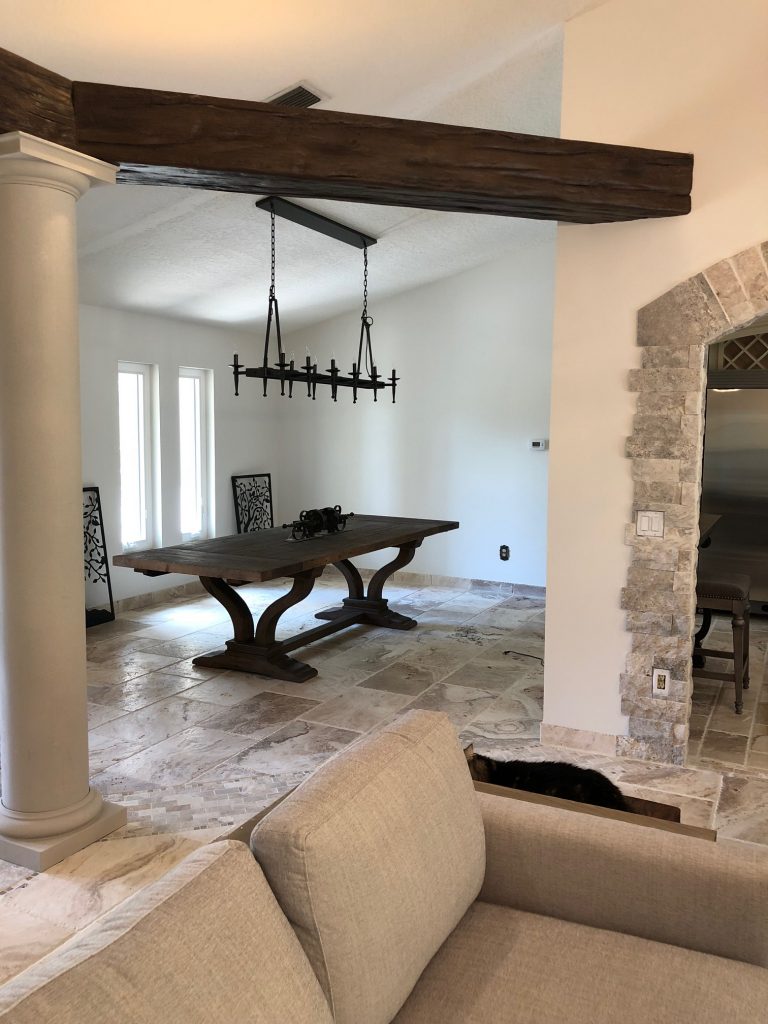 Caryn stained the beams to match other dark wood elements in her home; like this gorgeous medieval-style table.

Caryn's only regret is that she didn't start the project when she first received the beams, but better late than never!