We were recently sent pictures of a stunning bedroom redesign that demonstrated how to seamlessly camouflage modern home features with our realistic faux wood products.

One of the challenges of turning a house into a home is disguising ugly, but practical design features. This is especially true in more modern homes, which incorporate all sorts of features like built-in cupboards, central air and HVAC systems. While those make the home really comfortable to live in, they're definitely not the coziest of features; and really stand out when you try to add a more classic or rustic feel to a room. 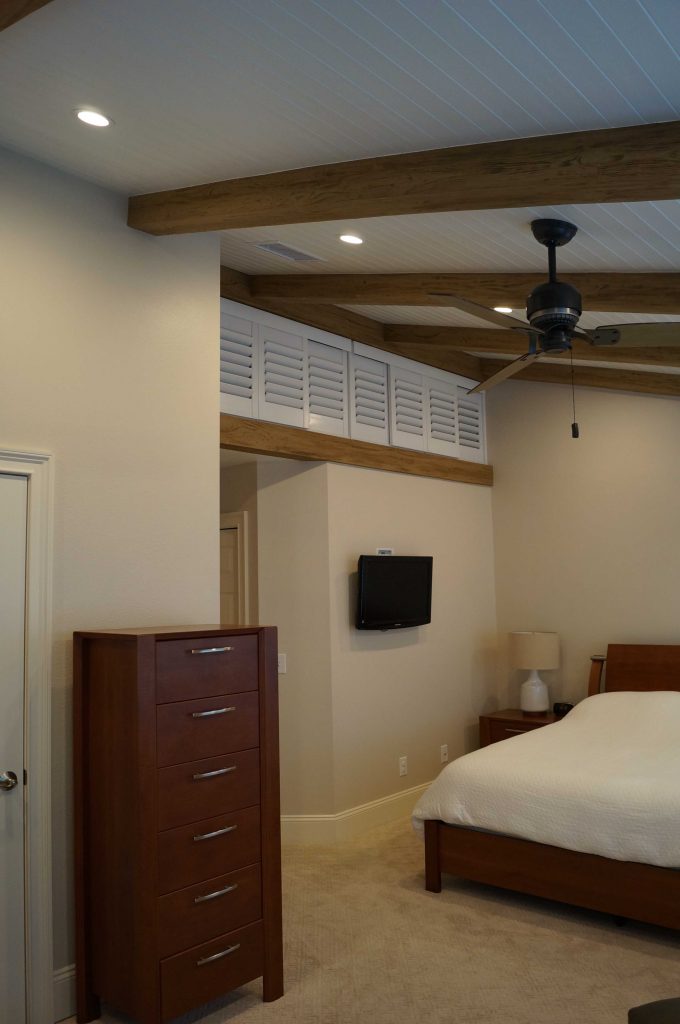 But there are ways you can have modern features without sacrificing style - the remodel of this bedroom ceiling perfectly illustrate how it can be done. 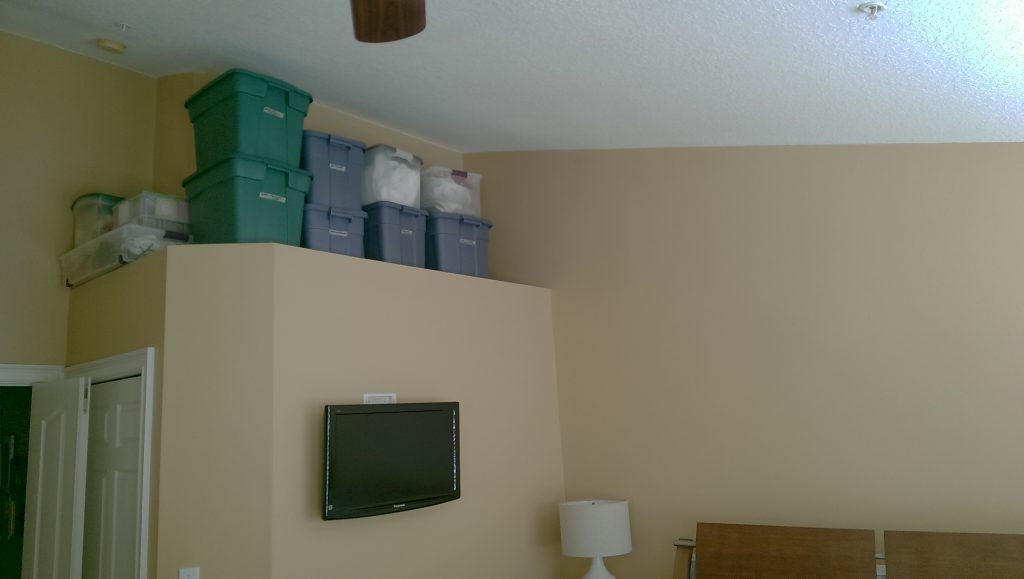 This home resides in Tampa, Florida - where many of the houses are modern, and the builders traded custom character for creature comforts. This particular example looks like it was built in the 1980s or 1990s, and started off with very functional framing and some dated design features like a popcorn ceiling. 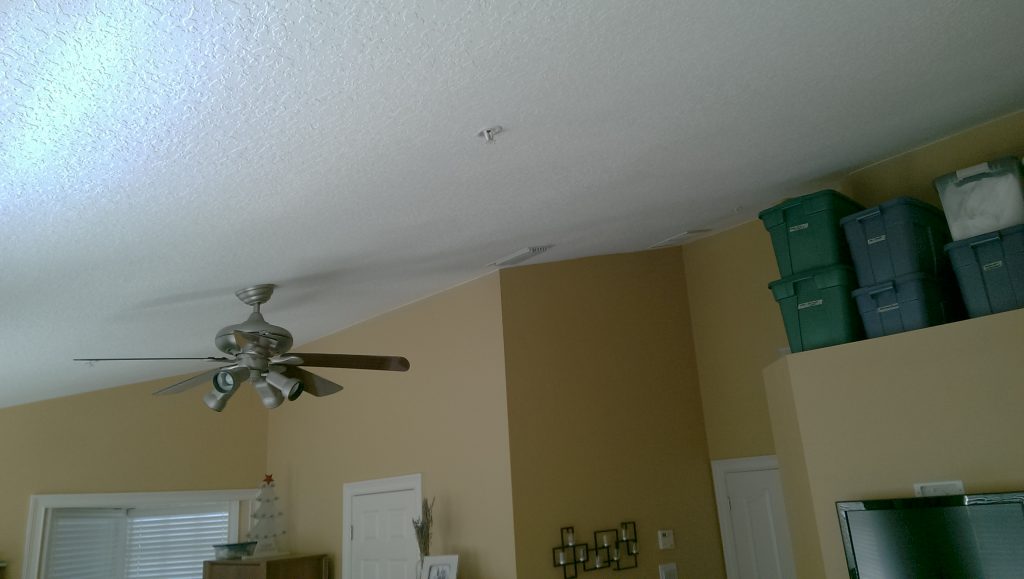 The owners wanted to update and transform this outmoded design, and part of their plan involved adding some wooden beams to give the house a more rustic look. They also wanted to make better use of the layout in the bedroom - which, as you can see here, features an en suite half-bathroom that cuts right into the room, and has storage space above it. In the BEFORE picture you can see some ugly plastic bins shoved up there - which is pretty much the best use of that space you could make. 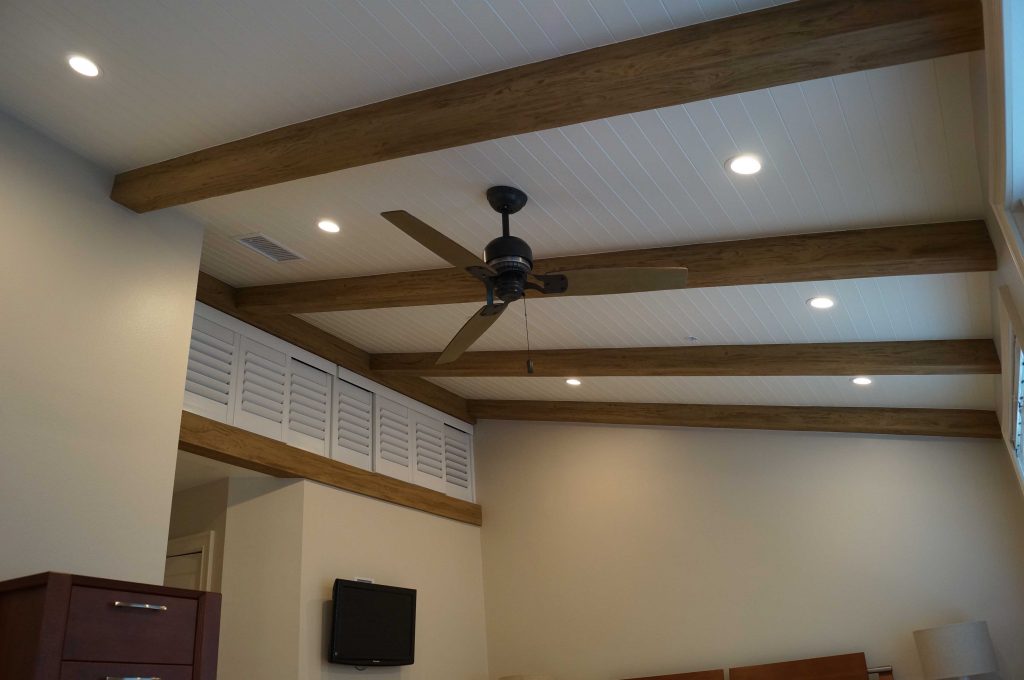 AFTER: Custom Driftwood Beams extend across the newly installed beadboard.

The homeowner's solution to the layout of the room was to install custom storage cupboards that stretch across the top of the bathroom and continue above the entrance door. Not only does that double the storage space available, it makes the room look a lot more coherent, and hides the contents of the cupboards. The only problem was how to make that addition fit into the style of the room. 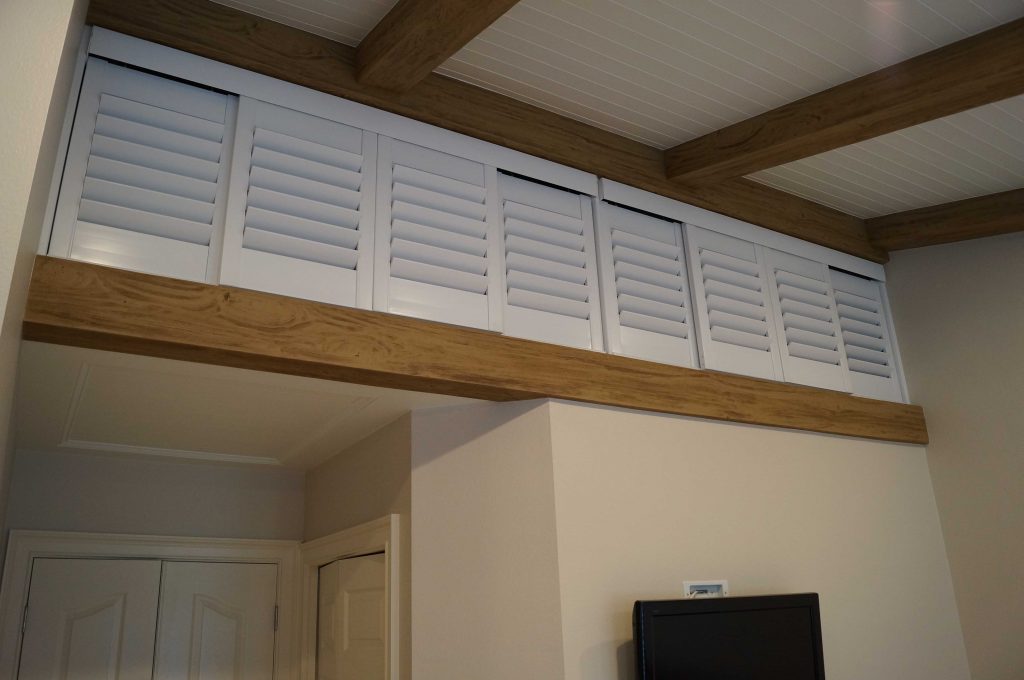 Custom cupboards extended across the old, dead space - and were framed with our beams.

To solve the issue, he homeowners decided to replace the popcorn ceiling with beadboard, and then overlay that with our Custom Driftwood Beams in Light Oak finish to really make it pop. That gave them the idea to frame the cupboards with the same type of beam - to make it look like the cupboard space was created out of the space between two structural supporting beams. 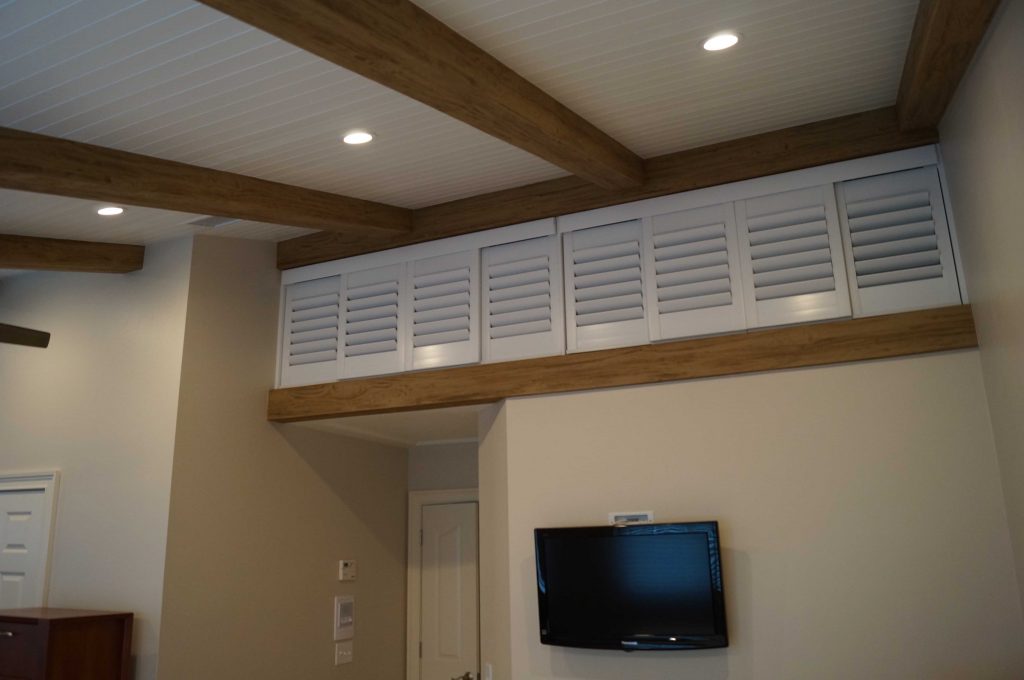 AFTER: A better view of the practical new storage cupboards.

The beams were the perfect choice for this project because the light oak color blended with the tropical style of the room, and the beams themselves were lightweight and easy to install - ideal for a project in which using real wood would have been impractical and prohibitively expensive. 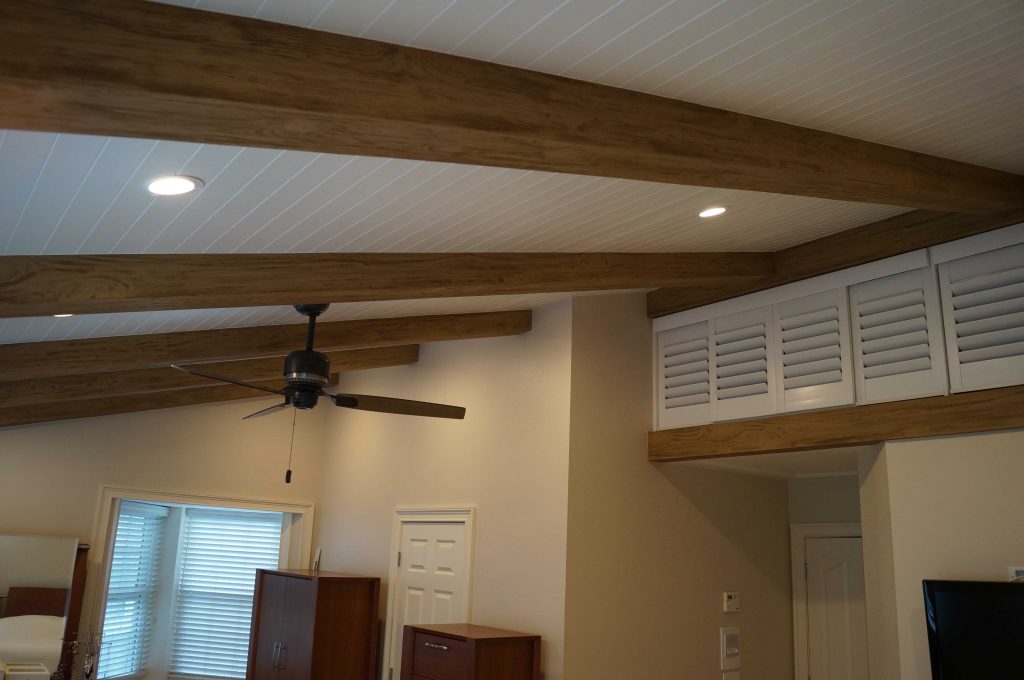 The beams were installed to resemble real structural supports.

Installing the beams on the ceiling was straightforward. After the beadboard was installed, the homeowners evenly measured the space available and then drilled mounting blocks through it, and slotted the hollow, u-shaped beams over the blocks to secure them.

It was the cupboard space that involved a little more thought.

Classic framing techniques were used to design the structure of the extended storage space. Another length of the Driftwood Beam was used to cover the bottom of that framework - making it appear like there was a single, solid timber beam stretching across the entire length of the space.

Achieving this, though, involved a little more thought than you might have anticipated. 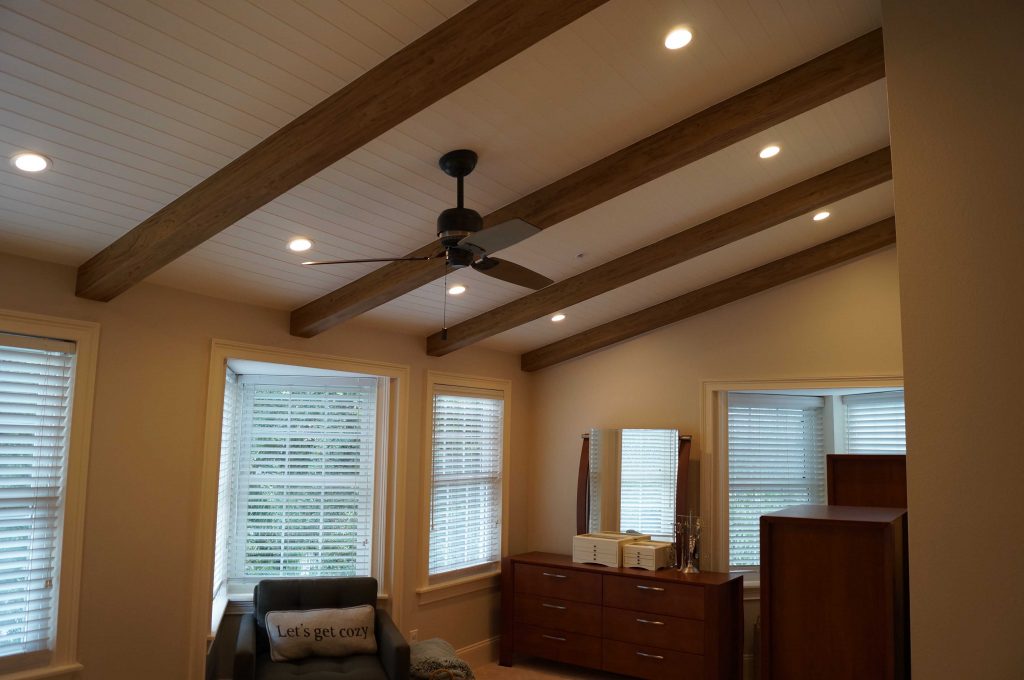 The ceiling beams really add some custom character to the room.

Our beams are sold with three sides - in a hollow u-shape. In this instance, the first section - extending across the open space between the wall and the bathroom - one side was carefully removed to make an l-shaped, two-sided section. The remainder of the beam was cut so only one side remained - allowing the whole thing to slot into the space available and give the impression of being a solid length of timber.

Fortunately our beams are made from lightweight and durable polyurethane foam, so cutting these sections out involved nothing more implicated than careful measurement and a regular wood saw. After installation, though, you wouldn't be able to tell that the beam wasn't complete. 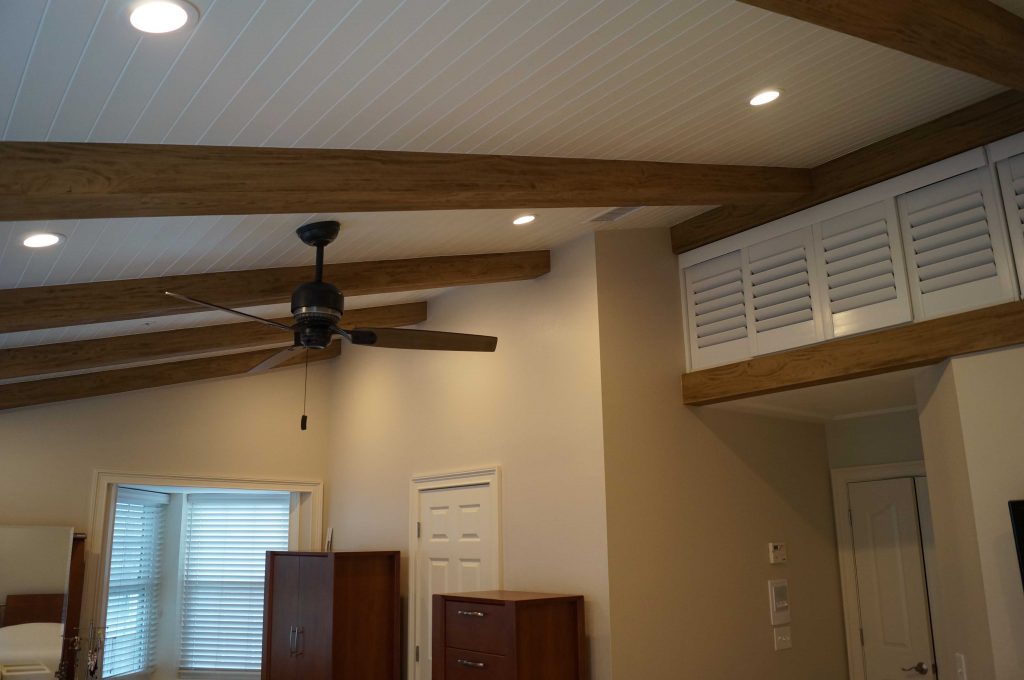 It's a very straightforward design, but one that perfectly mimics how real wood beams would have been used to build a home; and that's one of the reasons why they look so natural. Even better, the ugly, open storage space from before is now perfectly camouflaged; and stylish white doors give easy access to the extended cupboards.

We think this is a triumphant use of our products and a great way to make the most of an awkward design -- but what do you think? Let us know in the comments section below.