We've shared some pretty amazing home and commercial projects here, but in terms of scale it's difficult to beat the Albuquerque Convention Center; which uses nearly 150 of our beams to complete their stylish, southwestern look.

The Albuquerque Convention Center is located right in the heart of downtown Albuquerque, just ten minutes away from their airport and two minutes from major highways. It's one of the premiere conference locations in the state; with a state-of-the-art auditorium serving as the 'jewel in the crown' of this massive venue.

The center was originally built in the 1960's, but there was criticism at the time that it 'lacked character' and wasn't in keeping with the feel of the New Mexico capital. That's why when the firm of Dekker Perich Sabatini was hired to renovate the center, they chose to bring the look and feel back to basics by incorporating design cues in keeping with New Mexico.

In the Albuquerque Journal, Mayor Richard J. Berry outlined his vision for the ACC:

“A lot of convention centers I visit around the country, you have no idea if you’re in one city or another. I wanted to make this unique to us, make it look like us and feel like us, so people have that real special feeling they can’t get in other cities."

To achieve that, design principal Bill Sabatini and his team chose materials in keeping not just with the natural beauty of New Mexico, but also in keeping with the history of the region; forged with the power of human perseverance and the railroad. 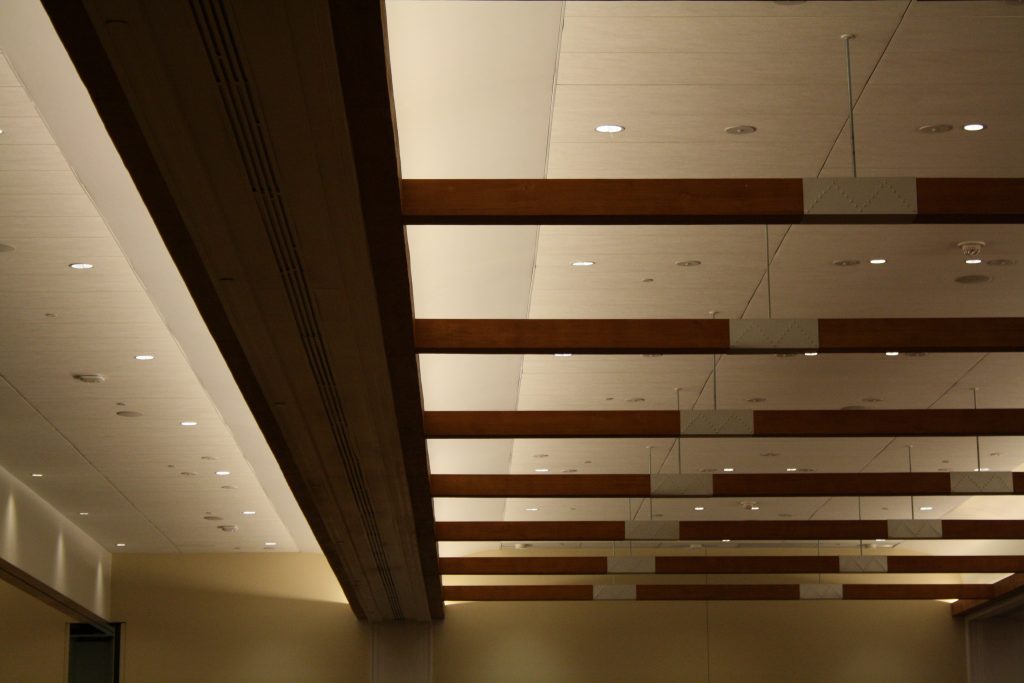 Beams from Barron Designs feature prominently in the ballroom area.

Wood is one such material, and features prominently in the redesign of the ACC. In fact, the ballrooms all feature dozens of beams overhead, blending with the lighting to create a beautiful and practical ceiling space.

But to achieve that look using real wood was impossible. Not only would the cost have been prohibitive, but it would have been a logistical nightmare to hoist up dozens of heavy wooden beams into pre-existing ceiling space.

So Dekker Perich Sabatini chose to use our faux beams instead.

There were so many reasons why faux wood was perfect for this project! 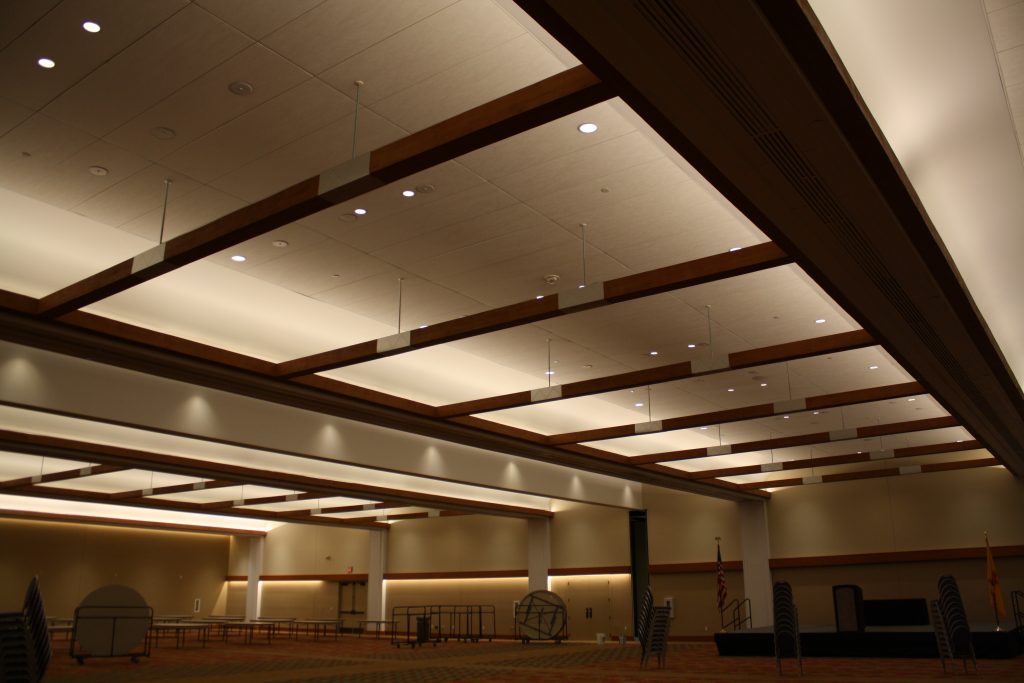 Lightweight and easy to install, going faux was essential to the success of this massive project.

First and foremost was the look of them. Molded from lightweight polyurethane foam, their look and texture is impossible to tell from real wood except by touch. Once installed overhead, they give the ballroom space the southwestern style that Sabatini and his team were looking for, without sacrificing any of the practicality.

Next, there's the cost. Real timber is incredibly expensive - especially when you're talking about the volume which was required in the ACC project. Over 100 full size beams would have cost hundreds of thousands of dollars.

Finally, it would be prohibitive to even find 144 beams that would match in size, shape and look. Timber is a uniquely unique building material; and even lengths cut from the same tree trunk can vary in shape and color.

The benefit of our beams is that they're molded from the same lengths of timber, and then finished using the same color and hue. That means each one looks unique and beautiful, but match the others in terms of size and color; for a unique natural look that nature couldn't actually achieve! 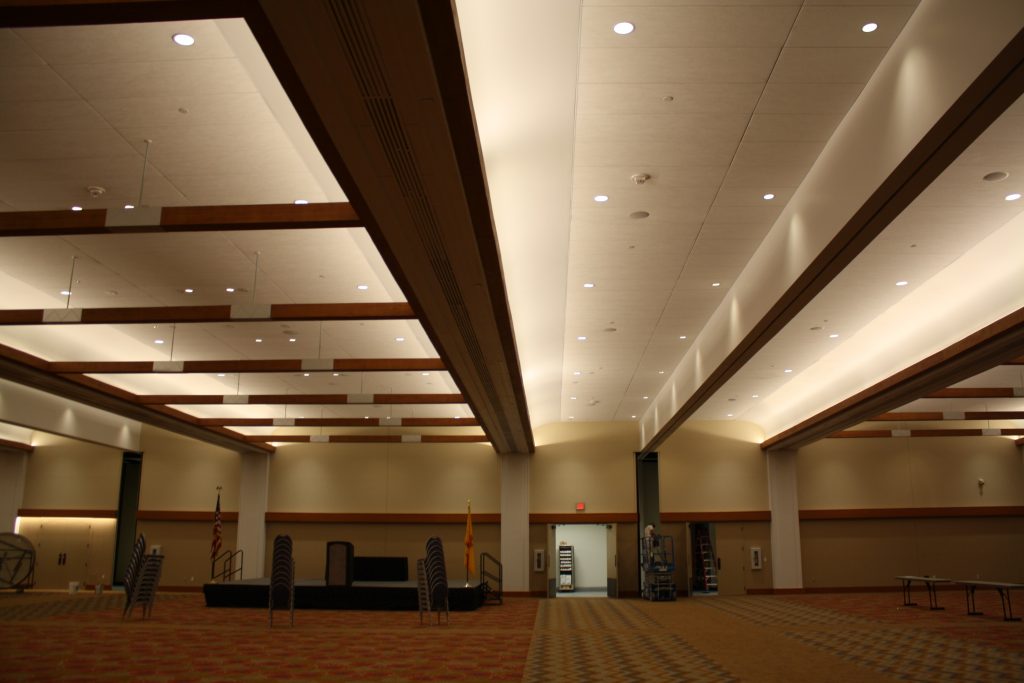 But in terms of a renovation, perhaps the most important advantage was practicality.

The beams can be installed with mounting blocks and screws, meaning it takes just a couple of guys and mere minutes to install them. They're also hollow; so running wires, cables and vents in them is easy and desirable. That is great for renovation projects, as it allows a lot more flexibility and the chance to upgrade fixtures that - in the case of the Albuquerque Conference Center - were originally installed 60 years ago.

Those advantages made our beams the perfect option to use in the ACC renovation project - and we're excited to see our products in a space visited by hundreds of thousands of people each and every year.

And we're not alone in being impressed by the finished project. At the NAIOP New Mexico, 2015 Chairman's Award Presentation, the work of Dekker, Perich and Sabatine was recognized for its vision and excellence: